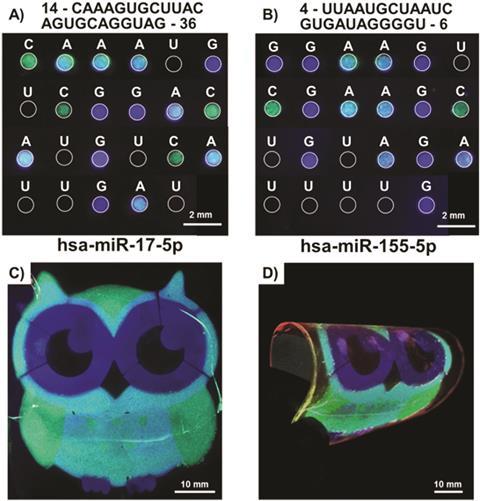 A flexible, transparent polymer film endowed with two small molecules can glow in three different colours, enabling data storage in a quaternary code. This chemical approach to data storage could allow more information to be stored in a smaller space than is possible with binary systems.

Modern storage devices need to be portable, robust and capable of carrying large amounts of data. One way to store information is through optical data storage. Data is recorded by making patterns that can be read back with the aid of light. Most techniques use binary code – systems that allow two different states, 1 and 0, for each data unit – to store information. Efforts have been made to increase the amount of information that these systems can store, mainly by physically reducing the size of each data unit. However, increasing the number of states each data unit could adopt, such as ternary (0, 1, 2) data storage, may lead to an exponential increase in information density.

Now, Emily Pentzer and her team at Case Western Reserve University, US, have used a chemistry-based method involving two small fluorescent dye molecules to create a data storage system, which can adopt four different states per unit: 0, 1, 2 and 3. Pentzer explains that this work is the result of ‘thinking about the concept of data storage and how a chemist would approach it’.

One of the dyes, a cyano-substituted phenylenevinylene, glows after being subjected to thermal treatment, the other, a nitrobenzyl benzoate, is activated by light. They each display a different colour. When both dyes fluoresce, a third colour is produced. The polymer film the dyes are deposited on is non-fluorescent (0) and can be written on through a wooden or metal mask with thermal treatment (1), light treatment (2) or both (3), giving three different colours that can be read under UV light.

Two fluorescent dyes,one thermo-responsive, the other photo-responsive, embedded in a polymer film and allow quaternary data storage: 0 = no fluorescence, 1 = green, 2 = aquamarine and 3 = blue

The film can be patterned quickly and easily, and the material is very hard-wearing: even after using sand paper to remove around 50% of the film or after submersion in boiling water the data is still readable.

Brent Sumerlin from the University of Florida, US, who works on stimuli-responsive polymers, suggests that the work may signal a greater role for chemists in data storage research. ‘The combination of orthogonally-responsive dyes within a commodity polymer matrix makes this a particularly scalable and clever approach to data storage,’ he comments.

Pentzer says that their next step is to decrease the size of the individual data units. ‘We’re working with physicists on using different wavelengths to see how small we can get,’ she explains. ‘With thermally responsive dyes we will likely run into resolution problems so we are looking at new small dyes and molecules.’