By coupling to phonons in their selenium titanate substrate’s lattice, electrons in iron selenide become superconductive below 65K 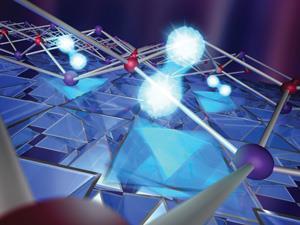 It may be possible to enhance superconductors by harnessing lattice vibrations

New observations from researchers in the US and Canada of how electron movement in superconductors can be boosted could be set to accelerate their development.1 Surprisingly, Zhi-Xun Shen from Stanford University and his team have found the enhancement comes thanks to something that can also cripple superconductors: lattice vibrations.

‘I’ve been working on superconductors for a long time,’ Shen tells Chemistry World. ‘Saying, “This is a new thing we can try to maybe get much better superconductors”, doesn’t happen very often, so we’re very excited about it.’

Superconductivity occurs when electrons pair up together, travelling in tight formation through certain materials with no resistance. The electrons move closer together than they otherwise would, with one theory being that this is helped by ripples in the positively charged crystal lattice they’re travelling through. However, heat produces other vibrations in the lattice that break up this serene progress, so very low temperatures are usually needed. Materials that become superconductive at ‘high’ temperatures above 30K do exist, with a cuprate discovered in 1996 that superconducts at 133K.

However, the underlying quantum mechanics behind high temperature superconductivity is poorly understood, meaning that the discovery of new superconductors often relies on trial and error. Over the last six years iron-based materials have opened up the field. Among these, iron selenide originally appeared to be an unpromising candidate as it only superconducts below 8K. Then, last year, Chinese researchers showed it could actually become superconductive when cooled to around 65K – the highest temperature seen in iron superconductors to date.2 For that boost, rather than simply melting the elements together, they carefully deposited iron selenide onto selenium titanate substrates in films only one crystal unit cell thick.3

To investigate this dramatic improvement, Shen’s team studied films using angle resolved photoelectron spectroscopy (ARPES). The scientists used x-rays from the Stanford Synchrotron Radiation Lightsource to eject electrons from iron selenide films, and study their properties including energy and angular momentum. They found that some electrons had less energy than expected, and that the difference was exactly the energy of the vibrations in the selenium titanate substrate. An individual quantum packet of vibration – known as a phonon – couples to each electron pair, bringing them together to achieve superconductivity, Shen explains. When the electrons are ejected by x-rays, they lose energy to excite these phonons.

‘We show unambiguously how the substrate can play a role in enhancing superconductivity,’ Shen says. He adds that these phonons should even help when electrons are otherwise paired up by phenomena other than lattice ripples. He now plans to attempt to use this approach in other materials, and see whether sandwiching a superconductor between two substrates could provide greater enhancement.

Xingjiang Zhou from the National Lab for Superconductivity in Beijing, China, who helped bring iron selenide superconductivity up to 65K, calls this finding ‘important’. ‘If the interpretation is right, it provides a new way of searching for new high temperature superconductors. However, to pin down whether the enhancement is caused by such a peculiar electron–phonon coupling, more experimental work needs to be done.’