Graphene made in a kitchen blender 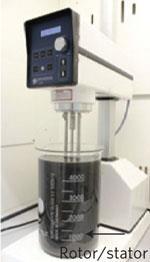 Shear mixing could be used to produce graphene flakes in bulk

Suspensions of high quality graphene can be produced quickly and cheaply using a common industrial mixer, researchers in Ireland have discovered.1 The scientists even managed to produce small amounts of graphene using a kitchen blender.

In 2008, Jonathan Coleman at Trinity College Dublin and colleagues showed that extremely pure graphene could be exfoliated from bulk graphite dispersed in common organic solvents by bombarding it with ultrasound, a process called sonication.2 However, this method is difficult to scale up. Unfortunately, processes that can produce graphene in bulk, such as chemical reduction of exfoliated graphene oxide, introduce holes and impurities, crippling the material’s fantastic properties.

Coleman says that they were set on the road to their discovery when speciality materials manufacturer Thomas Swan approached Trinity to come up with a way of making large amounts of defect free graphene. Not knowing where to start, the researchers drew up a list of ‘crazy ideas’ and shear mixing, where high speed blades are used to create substantial shear in a fluid, was one of the first they investigated. ‘It was at the top of the list purely because it was so easy, quick and cheap to do,’ says Coleman. ‘And happily, it worked.’ 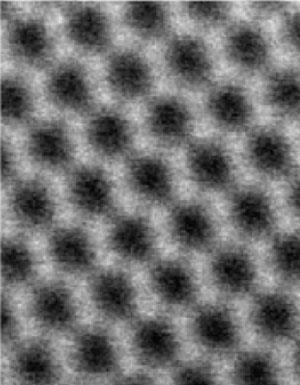 Further investigation revealed that relatively defect free graphene flakes 300–800nm in size, typically less than 10 atoms thick and including some monolayers, had been made – virtually indistinguishable from those of sonicated graphene. Using the shear technique the team has already exfoliated a range of materials including boron nitride and molybdenum disulfide. They even produced small amounts of graphene in an ordinary kitchen blender. The team theorise that shear more efficiently slices off layers of graphene than sonication because a greater proportion of the energy goes into pulling each layer sideways and away from those above and below.

As shear mixing is already widely used in industry, the researchers see no obstacles to scaling up the process. In a 10m3 tank they calculate it should be possible to produce over 100g of graphene per hour – far more than any other process. The team’s high quality graphene has already been used to reinforce polyethylene teraphthalate – just 0.07% graphene increased the polymer's strength by 40%. More remarkably, they produced strain gauges that were much better than their commercial counterparts simply by dipping ordinary elastic bands in the suspension.

Materials scientist Arkady Krasheninnikov of the University of Helsinki in Finland describes the research as ‘very simple and yet very impressive’. He adds that the team's demonstration that multiple layered compounds can be exfoliated could open the door to bulk thin films containing several different monolayer compounds.