Graphene transformed into diamond under pressure

Crushing a double layer of graphene under extremely high pressures can turn it into an ultrathin diamond film, researchers in the US have found. The phenomenon, which is not seen in either monolayer or multilayer graphene, may one day be used to develop ultrathin protective coatings, or potentially for electronics. 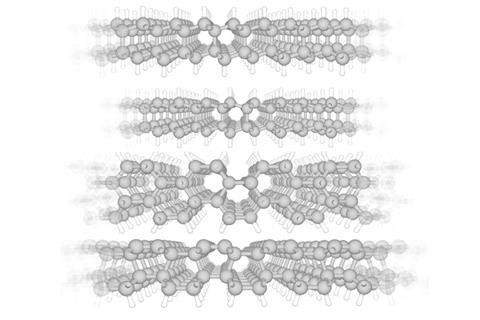 The discovery came when a group led by Elisa Riedo at the City University of New York were measuring the stiffness of surfaces by pressing an AFM tip into bare silicon carbide as well as silicon carbide covered with various numbers of graphene layers. By slowly withdrawing the tip while oscillating it continuously, the resistance to oscillation could be used to determine stiffness. They found a graphene monolayer reduced the surface’s stiffness slightly, whereas three or more layers reduced it considerably. Bizarrely, however, a bilayer graphene coating made the surface much stiffer. Even diamond indenter could not mark the bilayer-covered surface, suggesting it was at least as stiff as diamond.

Riedo’s team was perplexed. ‘For one year, we repeated the experiments, believing they were wrong,’ she says. Eventually, theoreticians led by Reido’s colleague Angelo Bongiorno pointed them towards theoretical research by Pavel Sorokin’s group at the National University of Science and Technology MISiS in Russia, which predicted that graphene could be transformed into diamond. ‘They told us “Maybe this is exactly what you’re seeing”,’ says Riedo. Bongiorno and colleagues then adapted the MISiS model to the specific test conditions in Riedo’s experiments.

Density functional theory suggested the lattice mismatch between diamond and silicon carbide creates buckles in the first layer of graphene on the surface. These distortions reduce the energy barrier for the first two sp2 hybridised graphene sheets to transform to an sp3 hybridised diamond lattice. When more than two layers are present, however, the bonds with these additional layers hinder the transformation. ‘We’re now doing more to understand the importance of the interface,’ Riedo says.

Bernardo Neves of the Federal University of Minas Gerais in Brazil was not involved in the research, but in 2011 his group also published evidence that graphene can transform to diamond under pressure. ‘I am quite happy to see that our previous works may have inspired the authors to reproduce some of our experiments and theoretical analysis yielding similar results,’ he says. ‘Our original idea of compressing two monolayers, producing a different material through re-hybridisation…may be extended to other 2D layered materials.’

‘The real novelty of this paper is the demonstration that such layers can display ultra-high mechanical stiffness,’ comments Sorokin. ‘I’m sure these kinds of nanostructures will be really in focus in future because they have very promising optical and electronic properties. It will be significant when such properties were confirmed and measured for the first time.’