Has mystery of why benzene forms in cherry-flavoured soft drinks been solved? 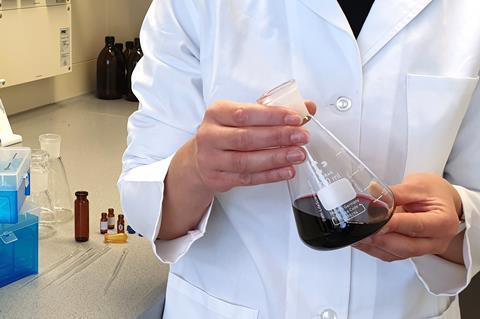 The starting point for the investigations was pure cherry juice made from sour cherries in the laboratory. The benzene-forming photochemical reaction didn’t occur in dark red cherry juice as the colour may block light

Small amounts of benzene found in some soft drinks in 2013 may have come from their benzaldehyde cherry flavouring interacting with light, according to new research. The reaction doesn’t happen in red cherry juice, however, and so it could be prevented by storing benzaldehyde flavouring in amber-coloured containers, say the researchers.

Benzaldehyde is one of the world’s most widely used food flavourings. It can simulate both almond and cherry flavours and odours, and it occurs naturally in many fruit extracts.

Because benzaldehyde is an aldehyde group attached to a benzene ring, it was suspected in 2013 when the German consumer organization Stiftung Warentest found some cherry-flavoured drinks contained up to 4.6µg of benzene per litre.

That’s a tiny amount – most people breathe in about 200µg of benzene from the air each day, and smokers can inhale 2000µg a day. But long-term exposure to even small amounts of benzene can cause cancer. There is no safe level of exposure, and the recommended level for drinking water in Germany is up to 1µg of benzene per litre.

To solve the mystery, researchers tested 22 flavoured drinks and natural cherry juice examining their pH, oxygen content, temperature, exposure to light and the presence of metal ions. Experiments with a variety of lamps found that the longer benzaldehyde was exposed to light, and the more intense the light, the greater the levels of benzene were that formed.

‘We suppose a direct formation of benzene from benzaldehyde during light exposure and suggest an ionic formation pathway,’ says lead author Stephanie Frank of the Leibniz-Institute for Food Systems Biology at the Technical University of Munich. The researchers also found the reaction didn’t occur in dark red cherry juice – and so they reason that the colour acts as a light filter and prevents the formation of benzene.

‘This is why we must be sure to protect flavorings containing benzaldehyde from light, from when the substance is produced to when the product is sold, for example, by storing them in amber glass vials,’ says Peter Schieberle of the Technical University of Munich.

‘This really highlights the importance of understanding background reactions and the how they change in complex mixtures,’ says Simon Freakley of the University of Bath, who was not involved in the research. But he notes that the benzene found in the soft drinks could have resulted from unknown industrial processes, or it could have formed in other ways. ‘The real reaction scheme could be more complex,’ he says.