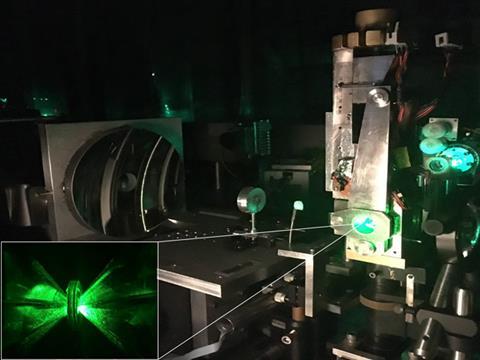 Hydrogen crushed between two diamonds (see inset) has been subjected to pressures usually found at the centre of planets.

Scientists are on a journey to uncover clues about hydrogen’s most elusive phase – solid metallic hydrogen. The prize for discovering it could be room temperature superconductivity – a world first.  But research groups are taking different paths to the same goal, with some now questioning what they will even find if they ever get there.

The concept of a hydrogen metal was first proposed in 1935 by Eugene Wigner and Hillard Bell Huntington, who theorised that under immense pressures a molecular hydrogen lattice will break apart into atomic hydrogen with electrons flowing freely through the material. Both agreed this state would only reveal itself if hydrogen was placed under a pressure of at least 25GPa.

It’s a rather modest estimate by today’s standards, according to Eugene Gregoryanz from the University of Edinburgh, UK, whose group discovered a metallic hydrogen precursor in January 2016.1 ‘They didn’t have any idea how compressible hydrogen is,’ says Gregoryanz.  He notes that researchers have already hit pressures 10 times greater than 25GPa and there’s still no sign of hydrogen’s metallic state.

Gregoryanz’s group is exploring hydrogen’s states at room temperature by placing the gas between the flattened tips of two diamonds. The tips are slowly brought together in a diamond anvil cell (DAC), with the cell’s temperature held at 300K. Using this method, the team has achieved reported pressures of up to 388GPa – pressures typically reserved for the centre of planets – but they are still yet to find metallic hydrogen. 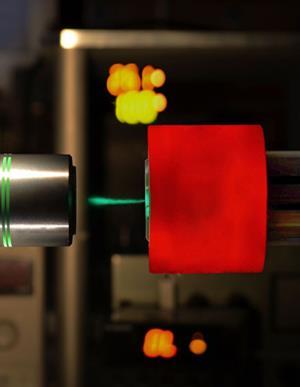 The diamond anvil setup at Edinburgh can subject hydrogen to pressures more than 3000 times those found in the Mariana Trench,

By probing the pressurised hydrogen using Raman spectroscopy, however, Gregoryanz and his colleagues are able to reveal the element’s transformation. The gas initially transitions to liquid molecular hydrogen before quickly adopting a solid form. As the pressure builds, the hydrogen molecules rearrange from one distinct crystal arrangement to another, but the metallic phase remains elusive.

Researchers have uncovered several phases of solid hydrogen so far. For the most part, these structures look like the common crystal arrangements of heavier compounds. Up to pressures of around 180GPa, at room temperature, rotating hydrogen molecules fall into a loose hexagonal lattice known as phase I hydrogen. Phase III forms after a slight compression beyond 180GPa and covalent bonds anchor the molecules into hexagonal trimers. If you’re able to bear down on it even further, phase IV will emerge at 230GPa and freely rotating hydrogen molecules will slide in between the trimer layers. But all of these phases are molecular arrangements that bear no relation to a metallic material.

Earlier this year, however, Gregoryanz’s team identified a fifth phase above 325GPa. The researchers suggest this phase is partially dissociated molecular hydrogen, which possibly resembles, in part, the structure of phase IV. This is tantalising for researchers: a further squeeze could turn this phase V solid into atomic metallic hydrogen.

But one group is claiming they have already seen the phase beyond phase V, and it may be metallic in nature. In a similar set up, but placing hydrogen sulfide under the anvil as opposed to pure hydrogen gas, Mikhail Eremets and his colleagues at the Max Planck Institute for Chemistry, Germany, announced in January 2016, a week after the Edinburgh group’s publication, that phase V appears at a lower pressure of 270GPa. They also declared phase VI hydrogen forms above 360GPa, albeit below 200K.2

‘We claimed we found not only two phases, but one of the phases is conductive hydrogen,’ says Eremets, who believes phase VI is likely metallic.

You have to be very, very careful with what you state. So many people fool themselves

It remains to be seen whether the community can confirm this new phase. But dealing with such uncertainty is a difficult task and, given the extreme conditions in a diamond anvil, it’s hard to verify results, according to Gregoryanz. ‘It’s extremely difficult to replicate – there aren’t many groups who can load hydrogen into a DAC,’ he says. ‘Then, you have to have an extremely good quality optical setup.’

If not, researchers risk compromising the experiment. ‘When you get to 400GPa, you’re talking about a sample size of 2 microns,’ Gregoryanz explains. With such a small sample size, it is inevitable the incoming laser light for Raman analysis will be partially absorbed by the diamonds. If the laser is not used sparingly, it will rapidly heat up the precious anvil and the diamonds may break apart in the cell, according to Gregoryanz. 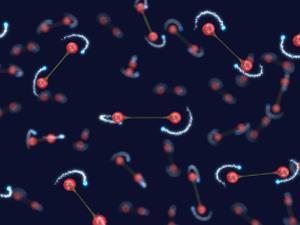 Can metallic hydrogen actually be made? The rewards for creating it could be huge

But some groups are perhaps taking a risk by using lasers to heat the hydrogen itself, such as Isaac Silvera and his colleagues at Harvard University in the US. This puts them on a different path to metallic hydrogen than Gregoryanz’s and Eremets’ groups.

‘You can [take hydrogen] up to say [100 – 200MPa] … and then heat it up to the liquid phase,’ comments Silvera. By placing hydrogen gas under ‘modest’ pressures at room temperature it will adopt a solid form, at which point Silvera and his colleagues ramp up the temperature to produce a liquid. He goes on to explain there will be a point when this liquid molecular phase transforms into a liquid atomic state, which should behave like a metal.

To achieve this, again hydrogen is pressurised in a diamond anvil, but with a key difference in the setup – a semi-transparent tungsten film is coated onto the diamond tips.3 By heating the film using  laser pulses, the team are able to rapidly heat the hydrogen, while also using light to probe the hydrogen’s reflectance and transmittance. They estimate the hydrogen can be heated up to 2200K.

Silvera asserts that the brief laser pulses will not break the diamonds and, on average, they will remain at room temperature. ‘If you heat for a few hundred nanoseconds, there’s plenty of time for thermal equilibrium,’ he says. ‘We have been very fortunate – we hardly lose diamonds.’

This has afforded them an opportunity to work in a domain also being probed by Sandia National Lab’s Z machine, an electric pulse generator capable of producing 27 million amps, where deuterium is subjected to extreme shock waves and magnetic fields.

Using a humble diamond anvil, however, Silvera’s group has observed a sharp increase in the amount of light reflected off hydrogen at these high temperatures – a typical indicator of an insulator-to-metal transition. But the team can’t firmly state they have uncovered pure atomic metallic hydrogen just yet.

For Gregoryanz, these tentative steps into the unknown are exciting, but he is not sure what this quest will ultimately uncover. He explains that at such high pressures, metallic hydrogen may only exist as a superfluid – an exotic, frictionless state of matter. As the pressure is ramped up, the hydrogen atoms have more and more energy and this might put a stable solid state forever out of reach.

If metallic hydrogen is a superfluid, researchers may have a material on their hands that defies understanding. ‘All of the superconductors that we know [of] are solid … and all superfluids are insulators,’ comments Gregoryanz. ‘This liquid hydrogen would be a superconductor and superfluid at the same time – nothing like this has ever been observed.’

Given they are exploring the limits of high pressure science the community isn’t willing to rule out solid state metallic hydrogen. But one thing is certain, according to Gregoryanz. ‘You have to be very, very careful with what you state and how you state it,’ he says. ‘So many people fool themselves – it’s unbelievable.’