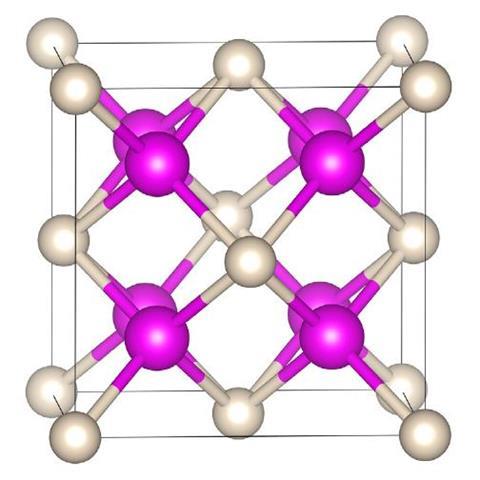 Crystal structure of Na2 He at 300 GPa. The new compound has a fluorite-like structure

Sodium is rarely reluctant to form compounds whether it’s with non-metals, hydrogen or a wide variety of ions. Helium, on the other hand, is not so keen. But, put it under enough pressure and even this most unresponsive of elements will succumb to sodium’s charms, scientists have discovered. In the latest work, helium has been shown to form a highly insulating solid, an electride, in which electron pairs are localised between cubes of sodium atoms and so act as the anions to the positively charged sodium atoms with the helium nuclei residing in the spaces in between.

The last bastion of inertness has fallen. This is a textbook changer

Helium is generally perceived as chemically inert. As every chemistry textbook will tell you, this element has an extremely stable closed-shell electronic configuration, zero electron affinity and an ionisation potential way beyond the call of duty. However, Xiao Dong, working in the laboratory of Artem Oganov at the State University of New York in the US, but now at the Center for High Pressure Science and Technology Advanced Research in Beijing, China, wanted to investigate this perceived inertness. Using an ab initio evolutionary algorithm, he found that helium might in fact form stable compounds with various elements. The calculations even predicted that a compound might form between sodium and helium, albeit at high pressures.

With these calculations in hand, the collaborating team of Alexander Goncharov of the Carnegie Institution of Washington turned to the diamond anvil cell to help them apply the requisite high pressures – more than 113GPa – to the synthesis of a sodium–helium compound. Diamond anvil cells have been used to pressurise many other chemicals, most recently and infamously hydrogen wherein scientists claim to have made a metallic form of that element. In the present case, Na2 He, it is metal and gas that are being crushed together and their electrons rearranged.

Helium is second only to hydrogen in abundance throughout the universe, and is at the heart of the sun and all stars’ fusion furnaces. It is also present in gas giant planets such as Jupiter and Saturn. It is therefore of fundamental importance to understand how helium behaves under pressure with other elements. Until now, theory had only posited that helium would form violently reactive ions with hydrogen and merely metastable compounds with that most aggressive of non-metals fluorine.

The team’s calculations also predicted the possibility of a compound of sodium, helium and oxygen, the synthesis of which will most likely be the pressing matter of their follow-up research paper. ‘The next step is to make Na2 HeO,’ Oganov tells Chemistry World. ‘This compound is stable at a very moderate pressure of 15GPa, and if we find a way to lower the pressure to 3–5GPa or so, this compound could be used for storing helium.’

‘The results are important because they change the way we think, not only about helium, but about inertness,’ says Sven Lidin of Lund University in Sweden. ‘The discovery of the first inert gas compounds made it clear that inertness is a question of conditions and that, given the right conditions, even xenon will react. This is, however, a far cry from making helium compounds. This is in many ways the last bastion of inertness that has fallen. This is a textbook changer,’ he says.

Lidin adds: ‘The implications for astronomy are clearly interesting, but the heart of the matter here is our perception of reactivity. The discovery of the compound is particularly attractive because of the way it was made with the large-scale theoretical search resulting in a single hit for binaries is a sign of the strength of modern theoretical methods. Theory and theorists have come a long way from proving the non-existence of He2 to proving that of Na2 He.’

The article was edited on 14 February 2017 to correct the location of the Center for High Pressure Science and Technology Advanced Research.