High pressures have crushed hydrogen to what researchers describe as a ‘probable transition’ to its prized metallic form.1 To achieve this the scientists pushed the pressures exerted by diamond anvil cells used in these experiments up from around 400GPa to 600GPa – six million times atmospheric pressure. 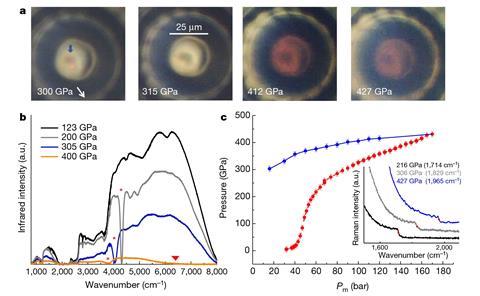 Paul Loubeyre and Florent Occelli from the French Atomic Energy Commission (CEA) worked with Paul Dumas from the Soleil synchrotron outside Paris, where they did high-brightness infrared spectroscopy studies. When they pressed hydrogen at phenomenal pressures between the tips of two diamonds, they saw a sharp change in absorption of infrared light as the material absorbed it all, consistent with a shift to a conductive metal.

‘It’s the first robust observation of the properties of hydrogen in this pressure range,’ Loubeyre tells Chemistry World. The scientists didn’t directly measure the sample’s conductivity, however, which is why they can’t absolutely claim to have produced the metallic form. Yet ‘the complete absorption in the infrared is a necessary condition for metallic hydrogen’, Loubeyre adds.

Scientists have sought metallic hydrogen since the 1930s, when it emerged from the first theoretical application of quantum mechanics to solids, notes Loubeyre. That is partly driven by the expectation that it could be a high-temperature superconductor. Eighty years ago, predictions suggested that metallic hydrogen may start forming above 25GPa, yet in practice the pressures needed have been much higher. In 2002, Loubeyre and colleagues used visible spectroscopy to study hydrogen at pressures up to 320GPa, suggesting that metal hydrogen should be observed around 460GPa

US researchers declared that they had isolated metallic hydrogen in 2017 under controversial circumstances, claiming to have reached pressures of 495GPa. At the time other groups were sceptical for several reasons, including that the pressure might have been overstated. ‘There is now a consensus that with a standard diamond anvil cell you cannot go above 400GPa,’ Loubeyre says. And the original sample has since been lost.

Researchers in Germany have also recently found that hydrogen switches from an insulator to a semi-metallic partial conductor at around 350GPa.2 It continues conducting beyond 400GPa in the team’s specialised cells, without becoming fully metallic. As well as measuring conductivity, like Loubeyre’s team they also exploited spectroscopy at even higher pressures. They found the Raman signal disappeared at 480GPa, indicating a likely shift to a metallic phase. 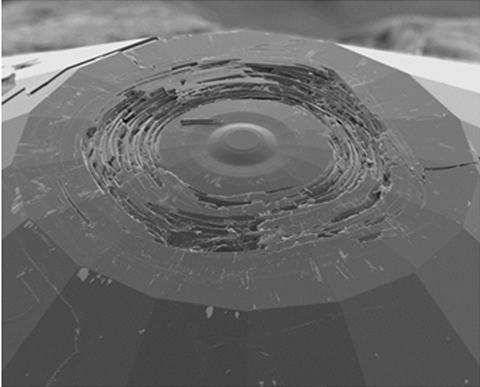 At higher pressures than conventional designs toroidal diamond tips only deform rather than shattering.

In 2018, the CEA team developed a toroidal diamond anvil cell that can attain pressures of up to 600GPa. By giving the diamond tips doughnut-shaped grooves with domes in the centre, they deform but don’t break at the higher pressures, Loubeyre explains. Yet the sample sandwiched between the tips is just 5μm in diameter, and therefore extremely hard to analyse. Getting a sufficient signal-to-noise ratio for infrared spectroscopy therefore requires the very high brightness infrared light available at Soleil.

Spectroscopy is useful because it tells the researchers about hydrogen’s electronic structure. In solids, energy levels full of electrons in the valence band and levels devoid of electrons in the conduction band are separated by a band gap. Insulating or semi-metal solids absorb light with the same energy as this gap. In metals the gap closes altogether. Consequently the probable metallic hydrogen sample in the new results from Loubeyre’s team absorbs all the infrared light that reaches it at around 425GPa. For similar reasons hydrogen turns from transparent to black above 310GPa.

Russell Hemley from the University of Illinois at Chicago calls the work ‘carefully done’ but is otherwise cautious. ‘They have identified an abrupt transition at an estimated pressure that happens to coincide with theoretical predictions,’ he says. However, he warns that there isn’t enough evidence to declare it is definitely the expected transition. Hemley also notes variations in pressure measurements between this and other studies and potential issues with pressure-induced changes in the optical properties of the diamonds’ tips.

More positively, Lilia Boeri from Sapienza University of Rome, Italy, calls the study ‘important’ and ‘exciting’. Boeri welcomes the close match between the CEA team’s analysis of hydrogen’s structure at pressures below 400GPa and previous studies that measured its conductivity. She therefore considers the interpretation of having produced metallic hydrogen to be reasonable. She also highlights that cutting-edge theoretical studies show close agreement with the bandgap measurements published independently since the new paper was submitted.3