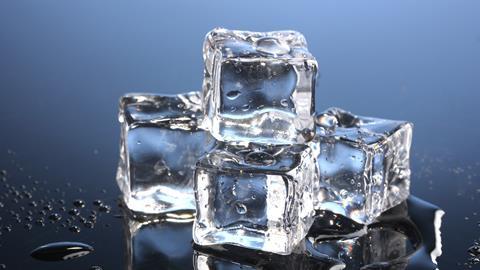 Shock compression has been used by US researchers to infer the structure of a novel superionic phase of water ice that forms at extreme pressures and temperatures.1 The results could potentially have important implications for scientists’ understanding of the properties of numerous icy planets in the solar system and beyond.

In everyday life, water is invariably found in one of three phases. Under more extreme conditions, however, it can assume a host of exotic phases. Compressing water at room temperature causes it to solidify through several different phases of ice with higher densities and different crystal structures from the everyday kind. As the pressure rises further, the bonding changes from covalent to ionic in character.

In 1988, researchers at the University of Pennsylvania predicted that, at around 100GPa and 2000K, water would form an electrically conductive ‘superionic’ phase comprising free protons within a fixed lattice of oxygen ions.2 Subsequently, researchers have predicted multiple superionic phases, suggesting they could potentially explain the mysterious magnetic fields observed in planets such as Neptune and Uranus.

Consistent with this prediction, experimental results have shown that the electrical conductivity of ice more than quadruples as the pressure rises from 70GPa to 180GPa. The possibility remained, however, that this was due to free electrons. But last year, Marius Millot and colleagues at Lawrence Livermore National Laboratory in California showed that the optical reflectivity remained low even as the electrical conductivity shot up, ruling out free electrons and thereby showing the conductivity must arise from delocalised protons.3 ‘What we couldn’t say was whether [the material] had a crystalline lattice of oxygen,’ explains Millot.

In the new research, Livermore researchers led by Millot and Federica Coppari used carefully-tailored sequences of short x-ray pulses delivered by the Omega Laser Facility at the Laboratory for Laser Energetics in New York to simultaneously compress liquid water samples at up to 400GPa and heat them to 2000–3000K. As the water reached its maximum compression, the researchers fired other lasers onto an iron foil to release pulsed x-rays into the sample. They used the resulting diffraction patterns to infer not just the existence of a crystalline oxygen lattice but also a phase transition from a body-centred cubic structure to a novel face-centred cubic structure at pressures between 249GPa and 278GPa. The researchers dubbed it ice XVIII and believe their technique could be widely applicable. ‘For planetary applications, the big question is what happens if you don’t consider just pure water but a mixture like, for example, water–ammonia,’ says Millot.

Theoretical physicist Roberto Car at Princeton University in the US is impressed by the identification of the oxygen lattice. However, he cautions that the researchers’ interpretation of the structural phase transition ‘relies on simulations that are themselves subject to significant errors’. Nevertheless, he says, ‘It’s very significant that they could achieve this range of temperatures and pressures with this technique, going well beyond what would be possible with a diamond anvil cell, and measure non-trivial properties like x-ray diffraction patterns in these very fleeting conditions.’