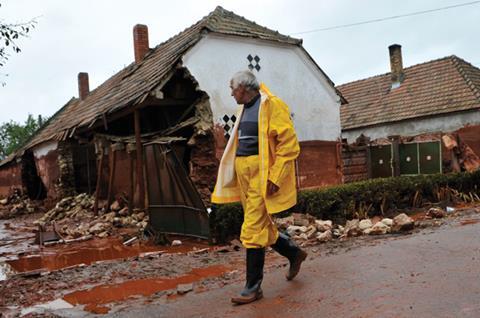 The red mudâ€™s trail of devastation stretched over 40km2

Red mud is a byproduct of the Bayer process for the production of alumina from bauxite. It is highly alkaline and contains metal(loid)s such as arsenic and vanadium, which are toxic to biota. Due to its fine grained nature, the material is also hazardous to human health, causing respiratory and cardiovascular problems, and is highly mobile in aqueous environments.

In October 2010, Hungary witnessed a major industrial disaster when the reservoir wall of the Ajka red mud depository failed, spilling 1 million m3 of highly caustic bauxite residue. The collapse, which was the single largest environmental release of red mud in history, led to 10 deaths and over 120 injuries, polluting hectares of agricultural land and the adjacent Torna–Marcal river system leading to the Danube.

Following international pressure, amendments were made to EU legislation governing accident prevention in the chemical industry, as the material did not fall under the supporting requirements of the Seveso II Directive (82/501/EEC) at the time. Extensive mitigation efforts costing 38 billion Forint (ca. £98.5 million) were undertaken by the Hungarian authorities, including reconstruction, dredging and acid dosing. Given the unprecedented scale of the spill, there was substantial uncertainty about the long and short term environmental impacts in the aftermath of the failure. Although extensive monitoring in the following year indicated that most of the affected systems had recovered, concerns about the water quality remained.2

Now, Will Mayes and co-workers at the University of Hull, UK, have shown that the implemented remediation measures have successfully limited the long term impacts of the spill on the affected Danube tributaries. Elemental and particle size analyses of fluvial sediments sampled downstream from the spill site in 2013 showed that the characteristic geochemical signature of the red mud was predominantly absent compared to in post-disaster surveys, highlighting that the contaminated material was mostly removed by intervention measures.

‘Sediments are a good indicator of the health of a river system – if there are contaminants, they are normally associated with the sediments,’ says Mayes. ‘Our recent survey shows that there is no real evidence of any long lasting effects of the material on the river system … there has been a very swift recovery, which is very positive.’ He also suggested that their data could be useful for the future environmental management of such depositories.

‘In my opinion, the most important conclusion from this study is that … well-organised human actions combined with the self-regenerating ability of nature can eliminate the long-term environmental effects of even such a serious industrial disaster as the red mud release from the Ajka site,’ comments János Szépvölgyi, the deputy director-general of the Research Centre for Natural Sciences of the Hungarian Academy of Sciences.

Mayes’ team are now trying to extract valuable commodities from the disposable by-products of alumina manufacture and steel making to avoid the use of primary resources.