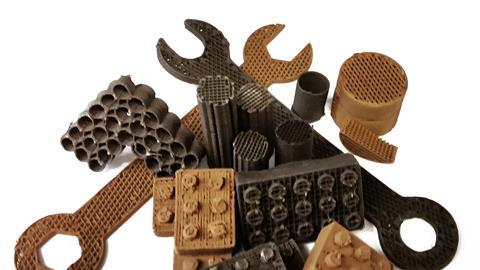 Dust and rock particles that mimic regolith on the surfaces of the Moon and Mars have been turned into 3D printer inks, offering a glimpse into how humans might one day use local materials in situ to construct and maintain extraterrestrial outposts.

3D printing approaches have already been demonstrated to make objects from simulated lunar and Martian regolith. However, these are not well suited for use in extreme, resource-starved, low-gravity environments due to processing limitations and high energy requirements. What’s more, although useful, the resulting objects have always been hard and inflexible.

Now Adam Jakus and colleagues in Ramille Shah’s lab at Northwestern University, US, have developed a system that prints soft, rubber-like objects – including cylinders, spanners and stackable LEGO-shaped blocks – using simulated Mars and Moon dust inks for the first time. Sintering can then harden the materials, giving the option of both soft and hard structures. ‘The simplicity of the printing system […] and the potential for in situ resource utilisation makes this desirable for extraterrestrial exploration,’ says Jakus. 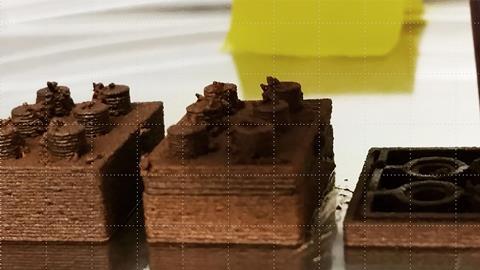 To make the inks, the team combined a solvent mixture containing an evaporant, surfactant, and plasticiser with simulant powders and the biopolymer polylactide-co-glycolide (PLGA), which acts as an elastomeric binder. The regolith simulants comprised unrefined volcanic materials certified by Nasa as very close in composition and form to those found in specific regions of the Moon and Mars. Apart from sieving to remove larger particles that would compromise the printing process, these materials were unprocessed, as they would be in space.

Importantly, PLGA is derived from lactic acid and glycolic acid monomers, which are common natural products found in urine and other biological waste. ‘This is ideal for environments where you need to make use out of absolutely everything and recycle absolutely everything,’ says Jakus. What’s more, none of the solvents are chemically transformed or spent during the process, so they could be collected and recycled.

Previous work from Shah’s lab has shown the same technique can print other materials. ‘Metal, ceramic, and biomaterial printing [are] possible using the same approach,’ says Jakus. ‘This is extremely useful in environments where you just can’t have a different kind of machine, or 3D printer, for each separate material you need to work with.’

‘What I like about this concept is that this less energy-intensive and autonomous process can deliver elastic components using feedstock that can be synthesised in situ, [despite] the rather complex regolith chemistry,’ comments Thanos Goulas who investigates 3D printing of lunar regolith materials at Loughborough University, UK. He wonders, however, if surface and gravity conditions on the Moon and Mars may hamper the process. ‘This is unknown until physical experimentation can be performed in an as close a simulated environment as possible.’