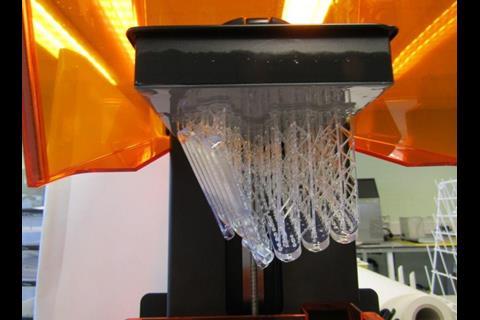 The reactor just after it has been made with the support structure still in place. 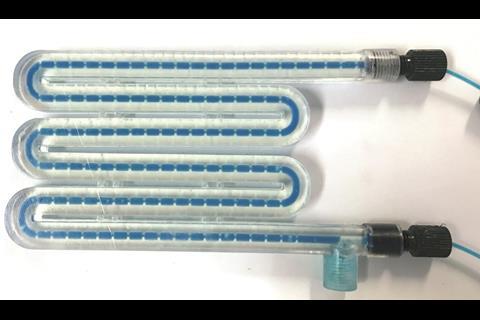 The high resolution of the printer, coupled with the satisfactory solvent compatibility of the photopolymers employed, allowed the reaserchers to make reactors with advanced features, such as regularly spaced and geometry controlled baffles.

A UK team has demonstrated the power of 3D printing in producing complex labware for about the same cost as a paperback book.

The inaugural study to come from Victor Sans’ group at the University of Nottingham, UK, is a proof of concept. In it they designed, manufactured and optimised a cheap yet complex flow reactor for a model system – silver nanoparticle synthesis.

It takes around 5 hours to print the reactor

Continuous oscillatory baffled reactors, or COBRs, are well-known for crystallising solids from continuous flow reactions. The flow dynamics generated by the complex structure of COBRs improve reagent mixing and reduce solid deposition within the reactor compared to regular tubular reactors. Until now, COBRs have been very laborious to make from blown glass and require high power pumps that are impractical for a research lab.

Sans and his team instead used computer-aided design and 3D printing to manufacture bespoke COBRs on demand. The cost and ease of printing means that production can easily be scaled up by running multiple reactors in parallel. Sans shows how the printed reactor’s flow dynamics results in suspensions of nanoparticles that are smaller and more highly regular than those from a printed tubular reactor of similar channel width, which by contrast, is quickly fouled by silver deposits.

‘This scale is unprecedented,’ says Sans. ‘It bridges the gap between what would be a microfluidic device and a mesoscale reactor.’ With the reactors each requiring around £8 worth of resin and 5 hours of printer time, Sans claims there is ‘nothing stopping us from using our imaginations to come up with completely new geometries [for reactors].’

Lee Cronin, who works with 3D printers at the University of Glasgow, UK, says: ‘Using a 3D printer is a great idea since the researcher can try out lots and lots of different configurations quite easily.’