Computational chemists in the US have modelled the strongest possible hydrogen bond for a neutral water cluster, by manipulating how adjacent bonds cooperate.1 The study provides an extreme benchmark for hydrogen bonds in water, but also hints at more subtle effects, such as how enzymes perturb bonds inside their substrates.

A hydrogen bond forms when an electron-poor hydrogen atom attached to an electronegative atom, a donor, reaches across space to an electron-rich acceptor atom, which transfers electrons back in return. That simple arrangement drives a wide variety of chemical phenomena. ‘It makes liquid water denser than ice, it links two DNA strands together, and it also drives protein folding among other factors,’ says Alexei Kananenka, from the University of Delaware, who performed the new research.

Hydrogen bonds can be affected by their neighbours. When a functional group acts as a hydrogen bond donor, it gains electron density, and becomes a better acceptor for other hydrogen bonds. The inverse holds true for the acceptor at the other side of the bond. ‘You can think of the electronic density of a molecular cluster like a totality: it adapts to the phenomena happening on one side of the bond or the other,’ comments Margarita Bernal–Uruchurtu, an expert on molecular interactions and physical chemistry in aqueous systems from the Autonomous University of the State of Morelos in Mexico. Collective effects like these cause macroscopic phenomena in condensed phases, like water’s self-dissociation. ‘It is not a property of a single water molecule, it is a property of the collective behaviour of water molecules,’ she says. 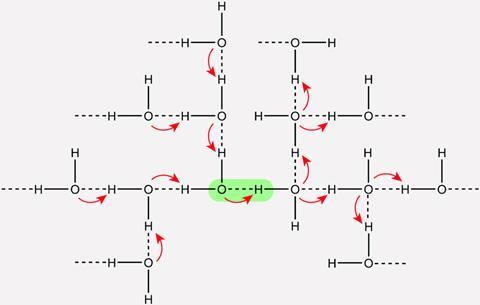 Kananenka had been exploring how to categorise hydrogen bonds in water with his collaborator James Skinner from the University of Chicago, and concluded that existing classifications didn’t carry well from system to system because of collective effects such as these. ‘You see that this weak hydrogen bond is actually as strong as that strong hydrogen bond, in different water clusters,’ he explains. ‘We learned that there’s a lot of overlap.’ While devising more reliable definitions, Skinner needed a wide selection of bonds to classify, but the hydrogen bonds in most water clusters are relatively weak. Collective effects offered an answer. ‘We decided to use these ideas of cooperativity to essentially engineer or build that cluster that we really need for our classification.’

As strong as it gets

He turned to the (H2O)20 dodecahedron, where each molecule is hydrogen bonded to three neighbours in any one of 30,026 possible arrangements. The cluster is something of a chemical physics celebrity, closely related to clathrates, approximating water molecules at a surface, and sometimes occupied by an oxonium ion to make a stable magic number cluster. The range of possible arrangements and the spectrum of possible hydrogen bonds they create were enumerated computationally by Sherwin Singer of Ohio State University and his collaborators in the early 2000s.2 ‘With this huge variety of possible hydrogen bond placements, you can definitely find clusters such as fit your needs,’ says Kananenka. He then assembled a dodecahedron containing a hydrogen bond where the donor was also a double acceptor, and the acceptor was also a double donor – the maximum possible cooperativity. Without applying a charge or otherwise tweaking the constitution of the cluster, that’s as strong as a water-to-water hydrogen bond gets.

The resulting simulated bond is truly extreme, three times stronger than a typical water hydrogen bond at 82kJ/mol and only 2.5Å long, rather than the typical range of 2.6–2.9Å. An unusually large proportion of the bond’s strength comes from induction, the effect of the permanent dipoles in the bond on the surrounding electrons. The huge perturbation of this strong bond also drives the IR and NMR spectroscopic signals of the donor O–H group far out of their normal range. ‘For O–H stretch frequencies they always expect them to be around 3200cm-1 to 3600cm-1. In our study we report a frequency about 1500cm-1,’ says Kananenka, who expects this would challenge experimentalists looking at similar bonds in other systems. ‘That’s definitely not a part of the space people look at when they try to find O–H stretch frequencies.’ Yet to his surprise, one of the classic relationships between a water hydrogen bond length and the vibrational frequency, Badger’s rule, still holds for the cluster, although that was devised with data for more conventional hydrogen bonds. 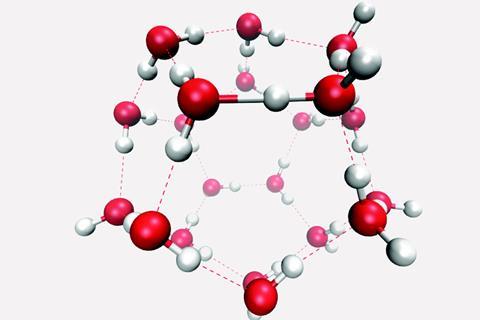 The dodecahedral water cluster, with the strong cooperative hydrogen bond in the foreground

This hydrogen bond arrangement studied by Kananenka and Skinner is very high in energy, meaning configurations like these are unlikely to be experimentally observed in water. ‘Nevertheless, because they are extreme, they allow us to probe the nature of hydrogen bonding, which is so important in aqueous chemistry and biochemistry,’ says Singer. The very high energy of the clusters induces surprising behaviour; for example, the hydrogen atom in this strong bond could easily be stripped from the donor atom over to the acceptor. ‘As an analogy, high-energy supercolliders probe processes that would never happen under ordinary conditions, but the results of those experiments explain the nature of matter as we encounter it in everyday activities.’

Kananenka and Singer both draw parallels to the effect of an enzyme environment on a molecular substrate, while Bernal-Uruchurtu notes how carefully engineering such interactions might become practically useful. ‘Using as soft a tool as a hydrogen bond to modify the properties, to have a specific probe of local environments is something that is very promising. It’s a very early stage, but it might be a good subject for the future.’