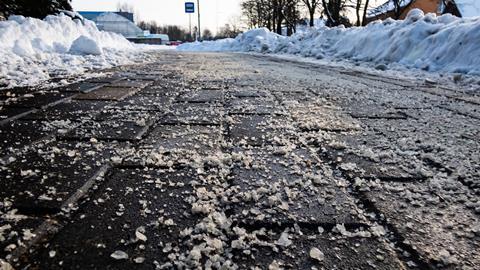 A heat transfer protocol that could halt the use of greenhouse gases in refrigeration has been demonstrated by US researchers. The technique, which harnesses the decrease in a liquid’s melting point when a salt is dissolved in it, shows notable advantages over some other proposed alternative refrigeration technologies.

Heat naturally flows from hot to cold. Refrigeration and heat pumps use energy to reverse this flow. Today’s refrigerators use vapour compression, depending on the cycling of a refrigerant between a low-pressure cold reservoir – where it evaporates – and a high-pressure hot reservoir – where it condenses – to move heat against the thermal gradient. However, many refrigerants that have been used are chlorofluorocarbons, and have been banned to protect the ozone layer. Replacement refrigerants such as hydrofluorocarbons are potent greenhouse gases and hydrofluoro-olefins may break down to toxic byproducts.

Researchers are therefore seeking alternatives to vapour compression. Among these are caloric materials, which change temperature in the presence of some kind of field. A magnetocaloric material, for example, can be heated by a magnetic field. Calorics often require impractically large field strengths and deliver low efficiencies, however.

In the new work, Drew Lilley and Ravi Prasher, both at UC Berkeley and Lawrence Berkeley National Laboratory, used an alternative ‘ionocaloric refrigeration’ scheme. Instead of applying a field externally, they used the electrochemical binding between the ions in a salt (in this case sodium iodide) and a solvent (ethylene carbonate). When the salt is added to the partially-frozen solvent, it begins to dissolve. To do so, however, the solvent must melt, and this requires energy. ‘[The solvent] wants to become a liquid, but it needs energy to do so, so it steals it from itself and cools down,’ explains Lilley. 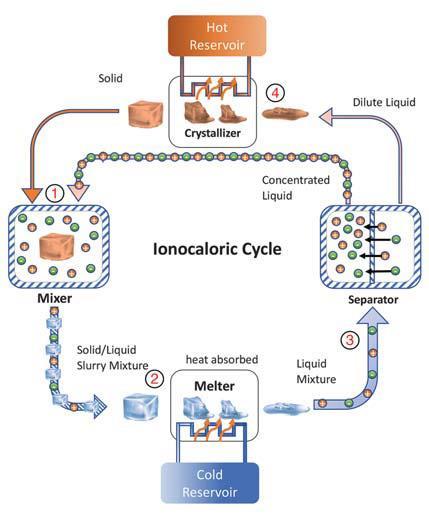 The researchers then placed the system in thermal contact with a cold reservoir. Finally, they separated the salt from the solvent by electrodialysis. This raises the solvent’s melting point, causing it to partially freeze again, releasing heat. This crystalline slush is pumped back to the hot reservoir, completing the refrigeration cycle. The researchers showed a maximum temperature decrease of 28°C and an energy efficiency of 29% under practicable operating conditions – superior to other caloric refrigeration systems – and they believe there is significant room for improvement.

Mechanical engineer Shannon Yee of Georgia Tech in Atlanta is impressed. ‘We’ve known of the ionocaloric effect for a long time, but it’s nice to see the embodiment of the refrigeration cycle using that,’ he says. ‘When we look at refrigeration and air conditioning, we have roughly 1.2 billion units in operation around the world right now, and that’s going to grow to about 4 billion in the next 30 years, and eventually that refrigerant leaks out. It is a very significant challenge to address.’ The next step, he says, is ‘more of the practical mechanical engineering that can turn it into a prototype end product’.