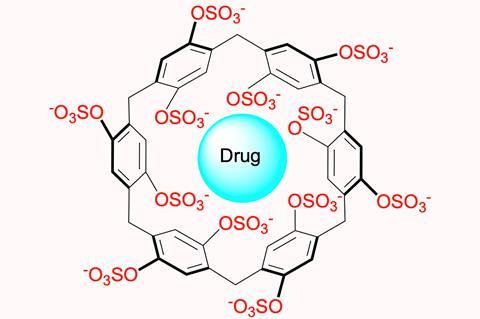 The macrocycle can trap a range of drugs of abuse including opioids, hallucinogens and stimulants thanks to its hydrophobic pocket

A macrocyclic compound has shown promise as a broad-spectrum antidote for drugs of abuse – including opioids, stimulants and hallucinogens – some of which currently have no reversal agent such as methamphetamine and phencyclidine (PCP). The pillararene compound P6AS can sequester drug molecules inside itself and changes their properties, and if administered following an overdose could reduce fatalities.

Overdoses of opioids, including heroin and fentanyl, are currently treated with the small molecule naloxone that blocks the relevant receptors. However, this doesn’t work with non-opioid drugs. Antibodies have been explored as potential overdose treatments as studies have shown they can bind tightly to drugs in the bloodstream, including cocaine and methamphetamine, and prevent their passage across the blood-brain barrier. However, antibodies are expensive to prepare, need to be stored under well-controlled conditions, and are prone to degradation.

Now, Lyle Isaacs and his colleagues at the University of Maryland, US, have harnessed the advantages of host–guest chemistry to find a potential broad-spectrum overdose treatment. ‘Our compounds are prepared by synthetic organic chemistry in a short three-step synthesis that is inexpensive and can be easily scaled to multigram scale,’ Isaacs says. ‘Moreover, our compounds possess very good aqueous solubility, thermal and chemical stability.’ 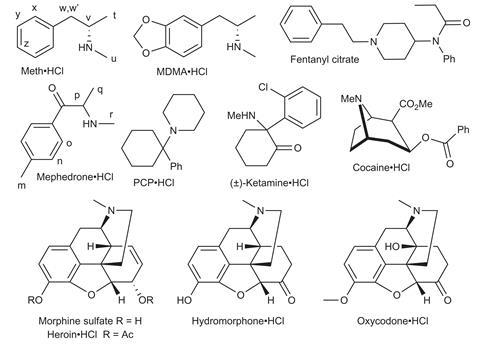 The chemical structures of the different drugs studied in this work

The researchers focused on pillarene compounds – macrocycles that form host-guest complexes – because studies in the past decade had shown these to reverse the effects of anaesthetics and the pesticide paraquat. Moreover, Isaac’s team discovered in 2020 that sulfated pillararenes bind strongly to hydrophobic cations in water. Many drugs of abuse are hydrophobic cations suggesting that pillararenes could potentially mop them up in the bloodstream.

To find out, the researchers conducted experiments on the binding affinity of four pillararenes with a range of drugs including methamphetamine, fentanyl, MDMA (ecstasy), PCP and mephedrone. The results confirmed that these drugs all bind to pillarenes in water, with particularly strong binding to the pillarene P6AS. ‘It was a welcome surprise that P6AS bound strongly to a broad spectrum of drugs of abuse, giving it real potential as a broad spectrum antidote for drug intoxication,’ says Isaacs.

P6AS is a macrocycle with six p-phenylene ‘walls’ that have 12 substituents forming a ring around a hydrophobic cavity. This enables P6AS to bind to hydrophobic cations via a combination of the hydrophic effect, non-covalent π interactions between the aromatic rings of the drugs and the walls of the host, and electrostatic ion–ion interactions between the sulfate substituents and the cationic ammonium ion of the drug.

In vitro experiments confirm that P6AS does not cause cell mutation or inhibit an ion channel crucial for heart function. The team also determined the maximum tolerated dose of P6AS that could be safely given to animals. Tests on mice dosed with methamphetamine or fentanyl showed that the narcotic effects were reversed when mice received intravenous injections of P6AS between five and 15 minutes later. What’s more, it performed as well as naloxone as a reversal agent for fentanyl.

‘Finding a real-life application, ideally one related to clinical or consumer use, presents the acid test in the development of different classes of macrocycles, and it commonly requires water-soluble derivatives,’ comments Werner Nau, a supramolecular chemist at Constructor University in Bremen, Germany. ‘The present study for pillararenes constitutes such a benchmark, thereby following previously pioneered applications for other macrocycles. The high affinity of sulfated pillararenes to methamphetamine and fentanyl is quite intriguing.’