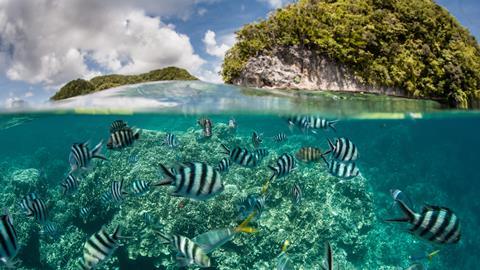 The tiny Pacific island nation of Palau is the first country to ban sunscreens that contain any one of 10 chemicals thought to harm coral reefs. Effective 1 January 2020, any of these products that the country has dubbed ‘reef toxic’ will be illegal to sell in Palau, including those with oxybenzone, octinoxate, octocrylene, triclosan and several parabens. Once the ban kicks in, importers or vendors caught selling sunscreens with the prohibited ingredients will be fined $1000 (£770) and the products can be confiscated.

Palau has a population of 22,000 and its economy depends in a large part on tourism that is aided by its pristine marine environment and barrier reefs. Part of the impetus for this legislation was a report that the Coral Reef Research Foundation (CRRF) released last year, which found that harmful sunscreen chemicals were widespread in Palau’s Jellyfish Lake, which is on Unesco’s World Heritage List.

‘We were surprised when we conducted the research about how pervasive these chemicals seemed to be, and also how difficult it was to study them,’ says Michael Dawson, a marine biodiversity researcher at the University of California, Merced, who is one of the scientists that wrote the CRRF report. ‘From the perspective of having worked in Palau for almost 25 years, I understand how important a healthy natural environment is to Palau and its economy,’ he adds.

Palau is not the first country to go down this road. In July, Hawaii passed the world’s first ban on sunscreens that contain oxybenzone and octinoxate. That law goes into effect in January 2021. Studies indicate that these two chemicals induce coral bleaching, are damaging to coral larvae and are endocrine disrupters.