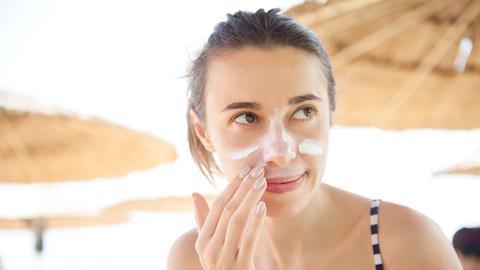 Explainer: How do sunscreens safely protect our skin?

In a summer of record-breaking temperatures in the UK and many parts of the world, millions are flocking to beaches, parks and other open space. If they are following public health advice, they will be wearing sunscreen. But how can sunlight – without which life on Earth would not be possible – be dangerous, and how does slopping on the ubiquitous white (or tinted) stuff keep us safe?

Why is sunlight harmful?

All objects emit a broad frequency spectrum of photons – a process called black body radiation. At room temperature, these photons mainly fall in the infrared. However, as objects warm up, the spectrum shifts to shorter wavelengths – which is why hot objects glow. With a surface temperature of around 5500°C, the sun’s emission peaks in the visible, but its spectrum also contains ultraviolet photons. These have enough energy to break chemical bonds and induce photo-degradation of our skin.

What does UVA and UVB protection of my sunscreen mean?

Scientists divide ultraviolet light into three categories. UVA photons are the least energetic, with wavelengths between 315nm and 400nm. These penetrate deep into the skin, where they can damage DNA and chromophores in skin cells, leading to premature ageing and the development of melanoma. Around 95% of solar UV light that reaches the Earth’s surface is UVA.

Surprisingly, however, the ‘sun protection factor’ of a sunscreen is defined by its ability to block shorter wavelength (280–315nm) UVB light – in the UK and EU the UVA protection is given by the star rating on the back. UVB is more readily absorbed than UVA – both by the ozone layer and, if it reaches us, by the upper layers of the skin. This causes visible (and painful) sunburn. UVB photons are even more carcinogenic than UVA ONES owing to their ability to excite a wider array of DNA-damaging reactions.

In theory, the highest-energy UVC light, below 280nm, should be the most damaging of all, but thankfully essentially all of this is absorbed by the ozone layer, so as long as you don’t play with an arc welding torch, you’re good.

So how do sunscreens block harmful UV?

In general they intercept UV photons before they hit cells and do anything nasty. There are two types of sunscreens but, contrary to received wisdom, they don’t behave all that differently. Inorganic – or mineral – sunscreens contain ceramic pigments and sit on the surface of the skin. The only two presently approved are zinc oxide, which is fractionally better at stopping UVA, and titanium oxide, which has the edge for UVB protection. Organic sunscreens are solutions or suspensions of various conjugated aromatic molecules (the US Food and Drug Administration currently allows 14). These can penetrate slightly deeper into the skin. Some sunscreens contain both.

In truth, although zinc oxide and especially titanium dioxide scatter strongly at visible frequencies – explaining their popularity in white paint – a 2015 study showed that the semiconductor band gaps of zinc oxide and titanium dioxide fall just in the near UVA region. At shorter wavelengths, therefore, the sun’s energy is absorbed by promotion of an electron to an excited state.

Secondly, though organic sunscreens are more easily absorbed into the skin, that’s not their raison d’être. A UV photon doesn’t choose its target, so a sunscreen molecule that doesn’t obstruct the path of a photon on its way to a molecule in a skin cell isn’t doing its job. Instead, the organic molecules form a thin protective film on the epidermis. When they absorb UV photons, one of the conjugated π-electrons becomes excited just as single electrons in metal oxides do in inorganic sunscreens.

The excited states then have to decay. This occurs via non-radiative ‘internal conversion’, in which electronic excitation is converted to vibrational excitation of the chemical bonds, and this dissipates into the surrounding skin, producing trivial amounts of heat. Or at least that’s the idea: an organic sunscreen molecule may also break up, rendering it unable to block further UV light. This can occur either if the photon promotes an electron to an excited state in which one bond has an antibonding character, or if, following the internal conversion process, enough vibrational energy is concentrated in one place to break the bond before it can dissipate. The trick to making sunscreens photostable is to produce molecules that avoid both these bond dissociation pathways.

Are there any risks?

Probably not to humans. Oxybenzone – one of the original organic sunscreens – has been the subject of persistent controversy. It is classified as an endocrine disruptor and has been detected in the bloodstream after application to human skin. In 2001 researchers found that, when fed to female rats, oxybenzone caused their uteruses to increase in size. However, in 2010 one report calculated it could take 277 years of continuous sunscreen use to achieve the equivalent systemic dose that produced these effects in rats. Moreover, many sunscreens no longer use oxybenzone or another endocrine disruptor – octinoxate – partly in response to these findings and partly because of evidence that both molecules cause coral bleaching (this has led Hawaii and the island nation of Palau to ban the sale of sunscreens containing either molecule). 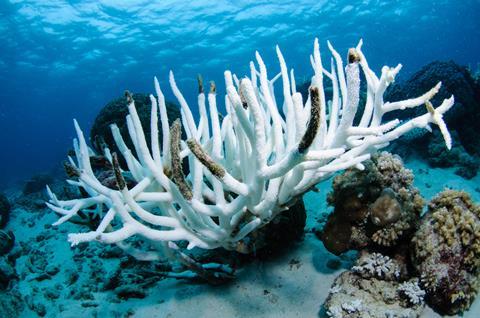 Some organic sunscreen ingredients, such as oxybenzone, have been linked to coral bleaching in the tropics

Nevertheless, the US Food and Drug Administration, which regulates sunscreens as topical drugs, is demanding further safety trials of all approved organic sunscreen molecules. This came after research found that organic sunscreens enter the bloodstream at higher levels than previously realised. In September 2021 the FDA posted a ‘final administrative order’ that declared that no organic sunscreens could be considered ‘generally recognised as safe and effective’ until such tests were concluded, and threatened to take away cosmetics companies’ licences to use these molecules in their products.

Some manufacturers market inorganic sunscreens as safer for both the user and the environment, but concerns have also been raised about zinc oxide and especially titanium dioxide as both are photocatalysts. Some studies have suggested they can produce reactive oxygen species, which could potentially damage skin. However, sunscreen manufacturers have worked on various strategies such as coating the nanoparticles to prevent this. Ironically, however, some producers of ‘natural’ sunscreens eschew these synthetic coatings – potentially making their sunscreens more likely to produce damaging free radicals. Moreover, some studies have indicated that zinc oxide can also be toxic to coral reefs.

Is there anything new in the pipeline?

People are always looking. If a company has a revolutionary product about to hit the market, they probably won’t tell, but some intriguing ideas have been floated in scientific journals in recent years. One is hydroxyapatite – the mineral from which human bones and teeth are made – as a sunscreen base. It does not itself absorb UV light well, but when doped with zinc, iron and chromium was found to absorb across the entire UV spectrum. Another is incorporating organic sunscreen ingredients into inorganic layered double hydroxide matrices like natural brucite clay to enhance their photostability. Finally, some researchers have looked at adding cerium oxide nanoparticles to sunscreen. Unlike zinc oxide and titanium dioxide that can potentially produce free radicals, these could actually scavenge the UVA-induced free radicals from skin cells.

Whether any of these will ever make it into a tube is anyone’s guess, but any way you look at it the best sunscreen is the one that you wear.