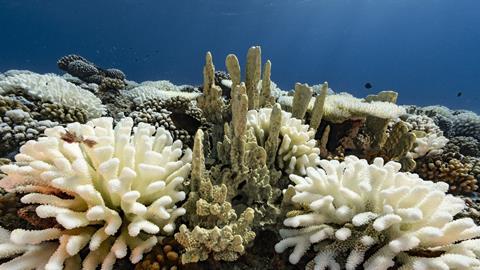 Welcome back to Chemistry its element, returned refreshed after a summer break. Speaking of holiday activities, this week, Katrina Krämer has been considering a UV-absorbent sunscreen ingredient that is banned in some countries, blamed for damaging coral reefs.

The 16th of August 2020 was a record breaking day – although it wasn’t one you should get too excited about. At 3.41pm local time, an automated weather station in Death Valley National Park in California, US, recorded a temperature of 54.4°C (or 129.9 for those more inclined to the Fahrenheit scale). If confirmed, this will be the highest temperature recorded in this century, beating the previous one of 53.9°C set in 2016 in Kuwait. There are reports of higher temperatures in the early 20th century, but they are debated as measuring equipment in the 1920s simply wasn’t the same as it is now.

Although this is only a single, isolated event, human-made climate change is an inevitable scientific fact. As weather events get more extreme – the Siberian Arctic recorded its first ever 100-Fahrenheit day (38°C) on 17 June this year – summers in the northern hemisphere will have more hot spells. That often means people are flocking to the beaches, and generally spending more time outside. And that, in turn, means sunscreen. 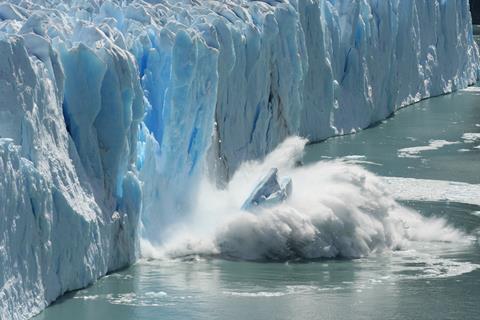 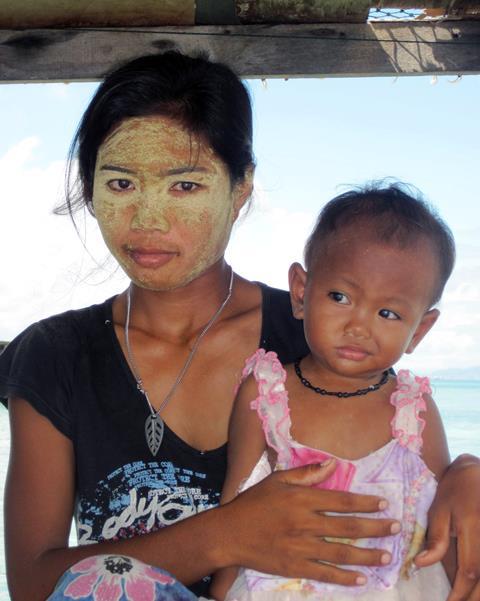 People have known for centuries that it is possible to avoid your skin burning to a crisp in the sun. The Sama-Bajau people of Maritime Southeast Asia, who traditionally spent a lot of time at sea, invented a sun-protecting powder made from water weeds, rice and spices. Commercial sunscreens sold in most shops are based on inventions made back in the 1930s and 40s.

It all started in 1938, when Swiss chemistry student Franz Greiter climbed the 3000m Piz Buin mountain near the Swiss–Austrian border. It was a cloudless day and the gleaming white snow fields intensified his sun exposure – as well as the satisfaction of standing on the summit, Greiter also took a good sunburn away from this day. As a devoted skier and mountaineer, he had previously suffered from sunburn, but this was one of the worst.

Greiter decided that he would use his chemistry training to prevent similar burns in the future. Working with his wife Marga Greiter, a trained beautician, the two developed something called ‘glacier cream’, which finally came to the market in 1946, sold by the company Piz Buin (which is still selling sunscreen today). It’s unclear what this early formulation contained, but when Greitner introduced the concept of SPF – sun protection factor – in the 1960s, it turned out that his glacier cream only had an SPF of 2. 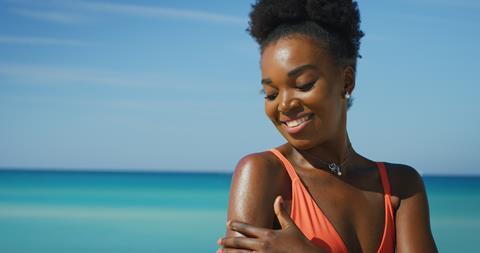 While the early formulations were very different from today’s huge variety of lightweight, non-greasy, moisturising, waterproof sunscreens, they all contain ingredients that lessen the harmful impact ultraviolet light can have on skin, where it not only causes burns but also increases the risk of skin cancer. There are inorganic particulates like zinc oxide or titanium dioxide that reflect or scatter UV light, and there are organic compounds that work mostly by absorbing light. One of these is oxybenzone.

The pale yellow solid is one of the most widely used organic UVA filters. It mostly absorbs longer-wave rays, though it also absorbs in the medium-wave UVB range, dissipating the harmful radiation by converting it into small amounts of heat. In the US, oxybenzone was approved for use in cosmetics in the 1980s. Although there has been some debate about its safety, there is no evidence that slathering oxybenzone-containing sunscreen on your skin is at all harmful.

Nevertheless, the compound has caused a lot of contention in the environmental science community and has even been banned outright in some countries. The reason for this is oxybenzone’s effect on corals, particularly its links to coral bleaching.

Corals live in a symbiotic relationship with algae, which provide up to 90% of the coral’s energy. But when corals get stressed by exposure to increased temperatures or certain chemicals, they expel these algae. Their colours fade – which is why it’s called bleaching – they begin to starve and most eventually die. Bleaching is a huge threat to coral reefs. In 2016, the world’s largest coral reef system, Australia’s Great Barrier Reef, experienced an enormous bleaching event that killed 30 to 50% of corals.

The first study to link coral bleaching to oxybenzone was conducted in 2008. The researchers put coral fragments into water-filled plastic bags to which they added one of several sunscreen ingredients. Corals that were treated with oxybenzone were much more prone to viral infections, which led to bleaching, than those that weren’t. Painting a bleak picture, the scientists estimate that ‘up to 10% of the world reefs is potentially threatened by sunscreen-induced coral bleaching’.

Another study on oxybenzone’s detrimental effects on corals was published in 2015. To date it has been cited more than 100 times and remains the most impactful study in the field. A team, based in Israel and the US, found that not only is oxybenzone toxic to coral cells in lab studies, it also messes with coral development during their larval stage. Finally, the researchers sampled water at several locations in Hawaii and the Virgin Islands, detecting oxybenzone concentrations ranging from a few micrograms to more than one milligram per litre. ‘Oxybenzone poses a hazard to coral reef conservation and threatens the resiliency of coral reefs to climate change,’ they conclude.

Based on these and many other studies, several national and regional governments decided on a full ban of oxybenzone and some other so-called reef toxic sunscreen ingredients. The tiny Pacific island nation of Palau was the first country to enact such a ban in January this year. While this won’t stop tourists bringing reef toxic sunscreens into the country, anyone selling products containing oxybenzone and nine other ingredients in Palau could be fined $1000. Hawaii is also set to ban oxybenzone sunscreens from 2021. 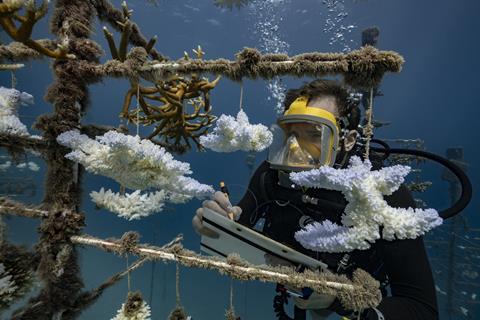 But not everyone welcomed the ban. The chief scientist of the US Personal Care Products Council called it ‘well-intentioned but misguided’, saying it might yield little to no environmental benefit while reducing access to cancer-protecting sunscreens – in fact, 70% of sunscreens on the market contain oxybenzone.

The studies linking oxybenzone to coral bleaching have also attracted criticism from within the research community for being lab-based, and not reflecting real-world conditions. Some feel that laying the blame on a single compound runs the risk of ignoring the real threats to coral reefs: agricultural runoff, sewage, overfishing and, in particular, global warming.

The issue remains, for now, a contentious one. Maybe the truth lies somewhere in the middle, as a team of Dutch scientists concluded in a study published only a few months ago. Their results indicate that oxybenzone ‘adds insult to injury’ by decreasing corals’ defences against rising water temperatures.

In a bid to replace oxybenzone, scientists now are looking at nature for tips and tricks. Marine algae and cyanobacteria are constantly exposed to large amounts of solar radiation, but, unlike other organisms, are pretty limited in their ability to run away and seek a shady spot. Instead, they produce a mycosporine-like amino acid called shinorine that absorbs UV radiation in much the same range as oxybenzone. It is already used in a few commercial sunscreens. But the red algae the compound is extracted from grows extremely slowly, which is why shinorine hasn’t seen more widespread interest. 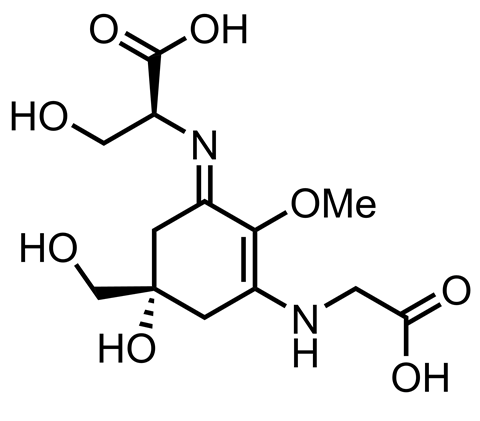 Research by a team in Florida – another US state that has been debating an oxybenzone ban – is trying to address this dilemma by transplanting genes from shinorine-producing organisms into fast-growing cyanobacteria. This means that instead of a year it only takes two weeks to produce harvestable amounts of shinorine. Whether this technology will mean fewer oxybenzone-containing sunscreens on the shelves remains to be seen. It’s likely that banning and replacing sunscreen chemicals is only the tip of the iceberg when it comes to saving coral reefs.

That was Katrina Krämer with oxybenzone.

Long term listeners will hopefully find next week’s guest reassuringly familiar – the previous host of Chemistry in its element, Meera Senthilingam, has just recently published a book: Outbreaks and epidemics – battling infection from measles to coronavirus. I invited her back to talk about some of the chemical compounds that have helped to turn the tide against infectious disease…

Treatment for drug-resistant TB is grueling. It can go on for years, can involve daily injections, is expensive and the drug options available are often limited. Above all, it doesn’t always work.

This is why TB patients and specialists alike were elated when a new drug arrived on the scene this past decade – the first drug to be approved for use against TB in 40 years.

So join our old friend Meera next week with TB drug bedaquiline. Until then, get in touch with any compounds you would like to know more about – email chemistryworld@rsc.org or tweet @chemistryworld. I’m Ben Valsler, thanks for joining me.