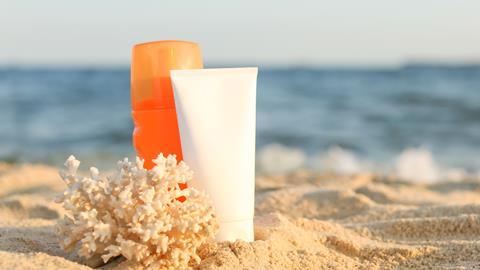 Scientists have revealed how the sunscreen compound oxybenzone kills corals and other marine invertebrates: under UV light, the animals convert the normally benign compound into a potent phototoxin.

Oxybenzone is one of the most common UV-light protecting agents in sunscreens. But it has been linked to coral bleaching, a process during which corals expel their symbiotic algae, making them prone to disease and starvation. This is why Hawaii, Palau as well as some other regions have banned oxybenzone-containing sunscreens.

However, it remained unclear why exactly this photoprotective compound is toxic to corals. This also makes it difficult to create non-toxic alternatives.

A research team from Stanford University, US, has now uncovered how the compound exerts its toxic effects. The team was surprised to find that UV light is a key ingredient in making oxybenzone toxic. Sea anemones exposed to oxybenzone and UV light died quickly, whereas those that weren’t exposed to UV survived identical oxybenzone doses. It turns out that the animals – using a metabolic pathway intended to remove contaminants – convert the compound into oxybenzone–glucoside, oxy-malonyl-glucoside and other conjugates.

The researchers couldn’t measure the conjugates’ phototoxicity directly because their high water-solubility made it difficult to introduce them into the animals. Instead, the team used a model compound, an oxybenzone whose hydroxyl had been replaced by a methoxy group. Both the conjugates and the modified oxybenzone increased the degradation rate of a light-sensitive compound almost six-fold. Under UV light, the model compound killed sea anemones three times faster than a 10-fold higher amount of oxybenzone.