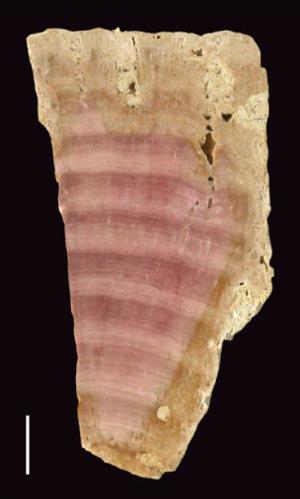 Chemists in Germany have elucidated the structure of an enigmatic pink pigment found in fossils of an alga that lived on Earth more than 150 million years ago.1 The compound contains an atom of boron sandwiched between a pair of polyketide scaffolds consisting of five aromatic rings arranged in a highly unusual configuration.

Initially the architecture of these pentacyclic ligands appeared to be unique, with the team unable to find anything similar among the millions of documented organic molecules. However, shortly after the pigment’s structural elucidation an analogous polyketide structure with antibiotic properties was discovered by other researchers in a present-day bacterium.2 According to Klaus Wolkenstein of the University of Göttingen, who led the work on the borolithochrome pigment, the discovery of an analogue of the molecule in an extant bacterium demonstrates that it has been retained throughout evolutionary history and, therefore, probably has important functions and likely occurs elsewhere.

Because the team was able to isolate only microgram quantities of the pigment, conventional methods of structure elucidation were not possible. However, a technique called microcryoprobe NMR was able to provide the required sensitivity for the structure to be resolved. ‘We were astonished to find that the carbon skeleton was not described in the literature,’ says Wolkenstein. ‘But subsequently a recent independent study of a Clostridium bacterium found a polyketide antibiotic, named clostrubin, with strikingly similar structural properties to the borolithochrome.’ 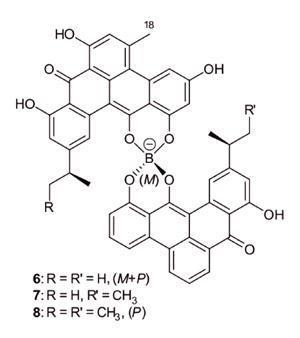 Wolkenstein says that this finding suggests that the algal compound could have originally been produced by an ancient bacterium. It also shows that complex polyketides, which so far have only been seen in present day organisms, were being produced by organisms since Jurassic times, demonstrating how little the building blocks of functional natural products have changed throughout history. Wolkenstein adds that the use of microcryoprobe NMR could open the way to prospecting for other complex molecules from ancient specimens, which in turn could throw light on the evolution of such metabolites or reveal previously unrecorded structures.

Commenting on the work, Sherif Elshahawi, who researches unusual polyketides at the University of Kentucky in the US, says: ‘The borolithochromes possess exciting structural features; they contain a rare benzotetraphene moiety, a unique bis-six-membered spiroborate scaffold and represent the first aromatic polyketide to contain the semi-metal boron. Boron has been shown to play important physiological roles in living organisms suggesting that these compounds could have served as boron transporters across the cell membrane for the Jurassic alga. This astonishing work certainly supports natural product discovery efforts from ancient organisms.’