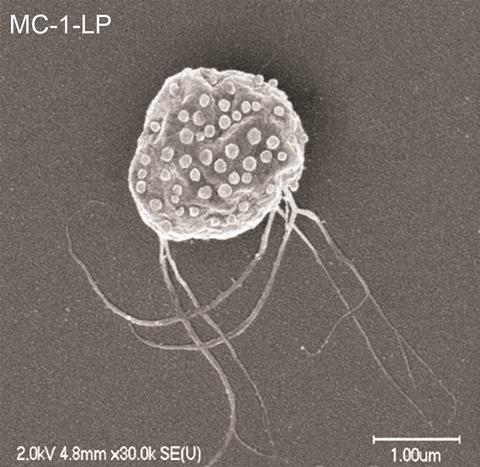 A scanning electron microscopy image of a Magnetococcus marinus bacterium, carrying liposome bubbles filled with an anti-cancer drug on its surface

Delivering cancer drugs into the heart of tumours may have just got a bit simpler thanks to magnetically-guided bacteria.1 The Canada researchers working on the cancer-killing bacteria believe they could deliver higher doses of drugs to cancers than currently possible, while shielding the body from harmful side effects.

Tumours’ rapid growth and lack of ordered blood vessels often leaves them severely oxygen depleted. Unfortunately, this can raise the pressure in the tumour compared to the surrounding tissue, hindering the diffusion of chemotherapy drugs into the tumour: often only around 2% of the chemotherapy drugs make it into the cancer. One obvious solution would be to encase the drugs in an artificially-propelled carrier, but this has been plagued by difficulties. Sylvain Martel of McGill University in Canada and colleagues previously tried using magnetic fields to propel synthetic drug carriers in the bloodstream.2 ‘The problem is that the force depends on the volume of magnetic material that you have,’ says Martel. ‘To get to the tumour you need something smaller than 2μm… The magnetic field you’d need would be beyond technology.’

‘The idea of using bacteria to deliver some form of therapy is not new,’ says Gary Friedman of Drexel University in Philadelphia, US, who was not involved in this study. ‘But linking liposomal drug carriers with bacteria, and showing that they reach a target area within a tumour significantly more efficiently with the help of a magnetic field is, I would say, a very significant accomplishment.’

Rashid Bashir of the University of Illinois at Urbana–Champaign, US, agrees. ‘Bacteria are known to go to tumour hypoxic regions,’ he says. ‘But [the researchers have] further guided them with magnetic fields, which is a very interesting and significant advance.’