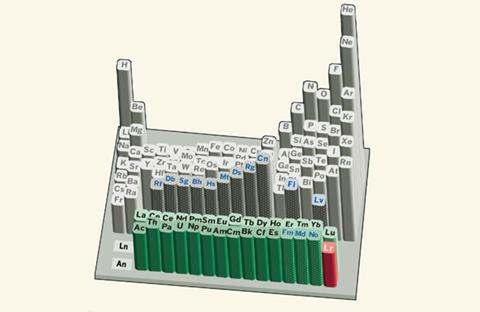 Size of first ionisation energies for the elements

Lawrencium’s position on the periodic table may now be up for debate after scientists in Japan successfully measured the first ionisation potential of the synthetic f-block element. The result may provide fuel for arguments that lawrencium and its close cousin, lutetium, should be considered part of the central d-block.

Named after Ernest Lawrence, the famed nuclear scientist, lawrencium was first produced in 1961 by bombarding a small californium target with boron atoms and is now one of the superheavy elements occupying the actinide series. But the family of laboratory-made elements are notoriously difficult to produce in large amounts, with lawrencium being one of the most cantankerous.

‘We cannot get a weighable amount of lawrencium,’ states Yuichiro Nagame from the Japan Atomic Energy Agency (JAEA). According to Nagame, researchers can only produce one lawrencium atom every few seconds and, once they do, its lifetime is very brief – it has a half-life of just 27 seconds.

These production rates are in stark contrast to other superheavy elements such as fermium, where researchers have been able to produce millions of atoms over a reasonable timescale. ‘This is a very difficult situation for experimentalists,’ comments Nagame.

But the JAEA team were able to overcome this obstacle by applying a surface ionisation technique. Producing lawrencium atoms via the same process used to discover it, Nagame and his colleagues captured the element in a helium and cadmium iodide gas. The gas was quickly passed through to a heated tantalum surface that gave the lawrencium sufficient energy to shed its outer electron. The freshly-produced ions were subsequently passed through a mass analyser in order to calculate the first ionisation potential, which the team measured to be 4.96eV – this is in excellent agreement with the predicted value of 4.963eV.

Such a result confirms that lawrencium has the lowest first ionisation potential of all of the known f-block elements. It also reaffirms its proposed electronic configuration, which theorists have suggested has a weakly-bound valence electron in a dumbbell -shaped p-orbital.

This work may now lead researchers to reassess lawrencium’s position on the periodic table, as it suggests the actinide may behave in a similar fashion to elements such as sodium and potassium, as well as d-block elements. ‘[Lutetium and lawrencium] – the last column of lanthanides and actinides – could be put into the group III column of the periodic table, under scandium and yttrium,’ says Nagame.

Irrespective of the debate this research will help to ignite, Sebastian Rothe from CERN in Switzerland believes it’s an important development: ‘I think it’s a great result – especially because it is on a very exotic element that is artificially produced.’