Measuring the isotopic composition of lead in layers of sediment in Naples has allowed researchers to track how Roman settlements and the network of pipes that supplied them with water changed throughout history. 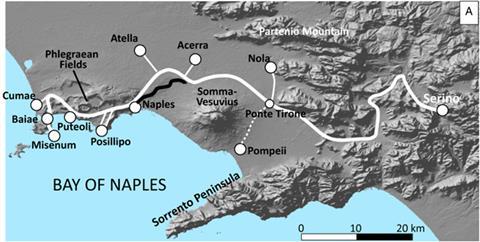 It is known that the Romans used lead pipes to transport water – back in 2014 a team led by Hugo Delile at the University of Lyon in France used isotopic analysis of lead in the sediment of the river Tiber to investigate whether they could have been poisoned by lead leaching into drinking water. This time the team measured lead isotopes in excavated sediments from the ancient harbour in Naples. By analysing sediment from different points in history, the team were able to explore the effect of the eruption of Vesuvius in AD79 had on the area’s water supplies.

They found a dramatic shift in lead isotope composition of a sediment layer that postdates the eruption, compared with samples from older sediments, marking a switch to different pipes. This suggests the eruption damaged the existing network, and that rebuilding it took about 15 years.  They were also able to track subsequent ‘upgrades’ to the pipe system, which continued to expand until the empire began to decline in the fifth century. The team suggest lead isotope analysis could be a useful tool for studying changing settlement patterns in the region during the fifth and sixth centuries.