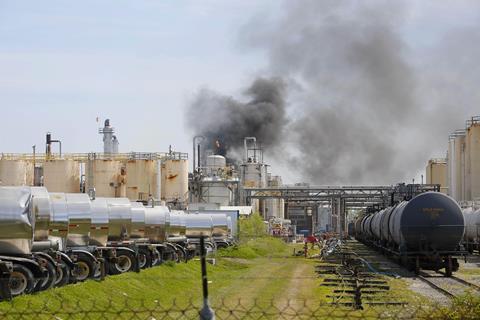 The fatal explosion in April at speciality chemicals firm KMCO’s plant in Crosby, US, that killed one worker and injured at least 30 more was triggered by a vapour cloud of isobutylene formed after a cast iron filtration strainer failed. That is the conclusion of a report from the US Chemical Safety and Hazard Investigation Board (CSB), released on 17 September.

The y-strainer on the suction piping to the isobutylene charge pump had a hole that was around 15cm across at its widest point. Eventually, the vapour cloud ignited, causing the deadly explosion. A shelter-in-place order was issued to community members within one mile of the KMCO facility. The incident interrupted normal business operations at KMCO and resulted in two rounds of employee layoffs, reducing the number of workers at the Crosby facility from more than 180 to less than 50, according to the CSB.