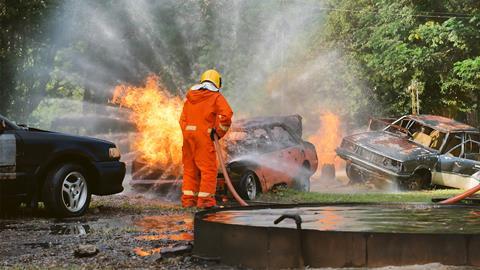 A new ceramic aerogel comprising nanocrystals embedded in an amorphous matrix shows far better thermal insulation than similar materials, as well as better mechanical and thermal stability under extreme conditions. These properties could allow the material to find use in heat-resistant clothing for firefighters where other aerogels have struggled to cope with the demanding conditions .

Aerogels made from ceramics such as hexagonal boron nitride are highly attractive thermal insulators. Their low density gives them low thermal conductivity as heat must propagate through matter, and it also makes them an appealingly light cladding material. However, ceramics are naturally brittle, which limits their use in applications where strain occurs. Moreover, it makes them vulnerable to thermal damage in extreme conditions as their structures can collapse when they are required to expand or contract significantly. Researchers have previously shown that elaborate structural engineering by, for example, forming a network of one-dimensional ceramic fibres can enhance the flexibility, but preventing the structure from recrystallising at very high temperatures is difficult.

In the new work, scientists in China and the US unveil a ‘hypocrystalline’ zircon nanofibrous aerogel that dramatically reduces these problems. The researchers used an air-turbulence assisted electrospinning method to produce a candyfloss-like ceramic felt from a zirconium-silicon precursor. They then mechanically folded this felt in to a zig-zag pattern. Finally, they sintered the felt at 1100°C. ‘The as-spun fibrous aerogels were in a glassy state and then formed the nanocrystals with sintering,’ explains Xiang Xu of Harbin Institute of Technology in China. Spectroscopic analysis confirmed that the resulting material comprised nanocrystalline regions embedded in an amorphous zircon matrix. 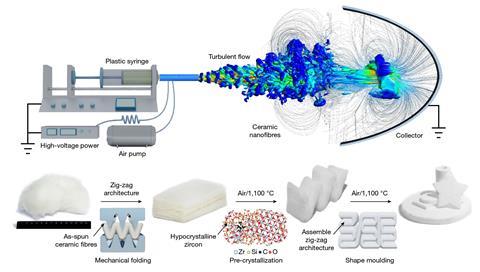 The amorphous matrix absorbs strain, preventing the material from fracturing under stress. However, the nanocrystalline domains are impeded from gliding past each other. Instead, the fibres absorb strain by buckling. In the researchers’ folded, zig-zag structure, radial expansion of one fibre is countered by axial contraction of another. The macroscopic structure is therefore highly mechanically and thermally stable. Furthermore, their process left carbon embedded deep within the fibres of the material, making it more opaque and better able to block radiative, as well as vibrational, heat transmission. This is especially important at high temperatures – above 500°C thermal radiation dominates heat transfer. ‘The absorption reduces thermal conduction through irradiation. [The coating] may get slightly hot on the hotter side, but it nonetheless reduces the overall thermal conduction,’ explains Xiangfeng Duan of University of California, Los Angeles.

The researchers conducted several tests of their material. In one, they heated an aeroplane engine fuel tube with a butane blowtorch. After five minutes, a tube insulated with a commercial polyimide foam barrier reached 267°C, whereas one protected by a conventional silica fibrous aerogel hit 159°C. By contrast, the new aerogel kept the temperature below 33°C. The researchers believe the material could find a variety of applications ranging from firefighters’ clothing to thermal insulation for spacecraft and detectors deep underground. 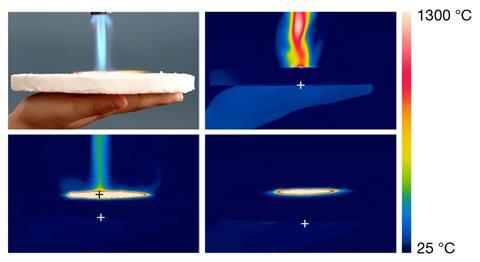 The ceramic aerogel’s structure allows it to resist high temperatures

‘[The work] is indeed a nice and important contribution for ceramic aerogels in extreme conditions,’ says Shenqiang Ren of the University of Buffalo in the US. ‘The most impressive part of this work includes its near-zero … thermal expansion coefficient in a broad temperature range, as a result from its architecture zig-zag design and hypocrystalline nanomaterial nature. More importantly, the manufacturing process is relatively straightforward and potentially scalable as well.’ He believes the design ‘could inspire the development of next-generation extreme materials’.