Our story on the chemistry Nobel prize is now live. Keep an eye out for our feature length story that will be looking in depth at the research and talking to the people who won the prize.

‘Upon serious consideration, I decided I wasn’t tall enough to be an outstanding goalie,’ said one of this year’s chemistry Nobel prize winners Aziz Sancar in a profile in the US Proceedings of the National Academy of Sciences. Turkish football’s loss has very much been science’s gain. 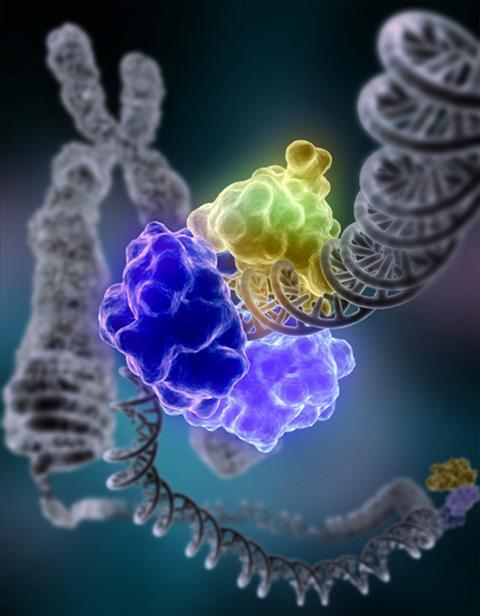 Paul Bracher, an assistant professor of chemistry at Saint Louis University, is weighing in on the prize on his ChemBark blog. As others have already noted, a number of people could have won the Nobel for DNA repair, not least the researchers who won the Lasker award. For Bracher the chemistry Nobel committee’s technical notes don’t shed much light on why the three winners were chosen. Debates of this sort after a prize such as a Nobel is awarded aren’t unusual as many people work on an area of scientific research and finding at most three people to give a prize to can be difficult.

We won’t know for 50 years how many times the winners of this year’s chemistry Nobel prize were nominated. However, the number of nominations previous winners received is available on the Nobel website. Ash Jogalekar has drawn out some interesting information from the database on his blog. Some highlights include the fact that organic synthesis giant Robert Woodward was nominated a record 92 times, Gilbert Lewis 41 times (he never won though, reportedly due to politics on the Nobel committee) and Lise Meitner was nominated 47 times combined for physics and chemistry (and never won either).

Past performance can be a predictor of future performance and when making Nobel prize predictions people often look to other big awards. As it happens DNA repair won the 2015 Lasker Basic Medical Research Award but neither of the two researchers who won it received the Nobel nod: Evelyn M Witkin at Rutgers University and Stephen J Elledge at Brigham and Women’s Hospital.

Stay tuned for further trivia and gossip throughout the day. We’ll be posting our story shortly and will have a feature length article providing in-depth analysis of the prize putting the award in context later this week.

And the 2015 chemistry Nobel prize is for ‘mechanistic studies of DNA repair’ and goes to Tomas Lindahl, Paul Modrich and Aziz Sanca. Our heartiest congratulations to them!

What are the perks of winning a Nobel prize? A parking space apparently. Turns out at Berkeley, if you receive a Nobel, you get a special car parking permit. Last year’s physics Nobel prize winner (the invention of the blue LED) Shuji Nakamura had little positive to say about his employer’s response to his Nobel prize. His reward was also a parking space. Too many Nobel laureates at US universities?

More from @PhilipCBall on changing how the Nobel prize should be awarded. Why Stephen Hawking deserves a Nobel for a lifetime of achievement.

10.28am Rather different speculation on the Nobel winner

There’s plenty of trivia and other curious facts on the Nobel history page as well as a few other places. Here’s some we picked out for your delectation.

‘Until 1960 the chairman [of the Nobel Foundation] was chosen from the small group of “Gentlemen of the Realm” - prime ministers, ministers for foreign affairs and other high officials. In 1960 for the first time, a renowned scientist was chosen: Arne Tiselius, professor of biochemistry at Uppsala University and 1948 Nobel laureate in chemistry. Since then the chairman has been chosen from among members of the prize-awarding institutions’

‘Just before and during the war, Adolf Hitler forbade Laureates from Germany - Richard Kuhn (Chemistry, 1938), Adolf Friedrich Johan Butenandt (Chemistry, 1939) and Gerhard Domagk (Physiology or Medicine, 1939) - from accepting their prizes at that time. However, they received their insignia on later occasions but didn’t get the cash prize.’

@PhilipCBall considers if Nobels should ever be for services to science.

The answer is surely yes, and I think it should happen more often… #ChemNobelhttps://t.co/McfrJAXwE0

More facts on the chemistry Nobel prize from the Nobelprize.org website. We recommend you have a poke around on their website. It’s filled with interesting stories, biographies and historical articles.

9.52am Nobels down the years

Check out Chemical & Engineering News’interactive infographic on the chemistry Nobel prize. We think the graphic is rather interesting for tracking historical trends (can we say fashions?) in chemistry by looking at which areas have won. It’s notable that no-one has won a chemistry Nobel in nuclear chemistry since the 1960s, whereas organic chemistry has a much wider spread of wins over the years. Analytical chemistry also has a wide spread but has won the least plaudits since the prize started.

We take a peek behind the curtain of the Nobel foundation and talk to someone in the know: the former chair of the chemistry Nobel prize selection committee. In this series of videos we talk to Bengt Norden at Chalmers University in Sweden about how the chemistry prize changes people’s lives, the controversies at the centre of some prizes and how to decide who should receive the credit.

Given that half the medicine Nobel was awarded for new ways of tackling parasitic worms, we thought this related piece of Nobel trivia was rather interesting. The 1926 Nobel prize for medicine or physiology went to Johannes Fibiger after discovering parasitic worms cause cancer – a breakthrough that turned out to be wrong.

The University of Copenhagen had a nice way of predicting the chemistry Nobel this year. The lecturers at the university used the prize to draw attention to the work of some of the frontrunners and raise awareness of the science.

The American Chemical Society ran a webinar where various chemistry pundits put forward their prognostications on who might win. Our very own Philip Ball was representing Chemistry World and his pick was Mildred Dresselhaus at MIT and Sumio Iijima at the NEC Corporation ‘for pretty much launching the field of nanocarbon’. The general consensus of the debate though, was that John B Goodenough was the favourite for the invention of the lithium ion battery.

Only four women have won the chemistry Nobel prize in its history. Tweet from @nicgaston suggests things aren’t getting better; they’re getting worse. Thigs are improving in the medicine prize though.

So what should it look like? Well, Medicine/Physiology looks *really* different: better than it’s ever been! pic.twitter.com/tCIFhhbhxL

More predictions from our columnist Derek Lowe over at In the pipeline.  He suggests it’s too early for CRISPR too, but has a whole host of other names that reads like a list of who’s anybody in chemistry: Whitesides, Langer, Gray, Schreiber, Schultz, Sharpless, Goodenough… He’s not putting his money down on any one pick.

As ever, the world and its dog have been making predictions of who’s likely to win. We’ve rounded up some of that punditry here. As they do every year, Thomson Reuters have been making their own predictions by doing a bit of number crunching and looking at citations using Web of Science. They claim to have correctly predicted 37 Nobel laureates, although I don’t think they’re claiming to have got the year right. You can check out their picks here. We think that one problem with their technique of using citations to try to pick a Nobel winner is that names get thrown up that are currently the hottest property in research. Consequently, the Reuters team has picked Emmanuelle Charpentier and Jennifer Doudna for the chemistry Nobel (among some other possibilities) for their controversial gene editing technique CRISPR. This seems a little early for us as the technique is just breaking through. The Nobel committee tend to be a bit more circumspect and wait a little longer to see how things pan out.

8.49am The Nobel in numbers

Thanks for joining us for another year where we track what’s going on in the run up to the awarding of the chemistry Nobel prize for 2015. If you’re on Twitter you can always follow us @ChemistryWorld to keep up, and we’d recommend the #chemnobel hashtag to see what the chemistry twitterati have to say.

First things first, the Nobel prize ceremony is slated to start at 10.45am UK time. While you’re waiting for the announcement, and if you’ve ever wondered who decides who wins the prizes and how, you can listen to us talk to Bengt Norden, professor of chemistry at Chalmers University in Sweden. He knows more than most having served on the chemistry Nobel prize selection committee for 10 years.

You might also be interested in reading about the 2015 winners of the medicine or physiology Nobel prize– an award with a strong medicinal chemistry angle this year. The gong went to the developers of antiparasitic drugs that have saved the lives of hundreds of thousands of people around the world. And if you want to refresh your memory on last year’s winners, check out our story.