Recipients discovered how cells can patch up damaged DNA

Tomas Lindahl, Paul Modrich and Aziz Sancar have been awarded the 2015 Nobel prize in chemistry

The 2015 Nobel prize in chemistry has been awarded to Tomas Lindahl, Paul Modrich and Aziz Sancar for unravelling how cells deal with DNA damage, be it from within the cell itself or from exposure to radiation. The work has been instrumental in developing the field’s understanding of how cancers and other hereditary diseases develop. 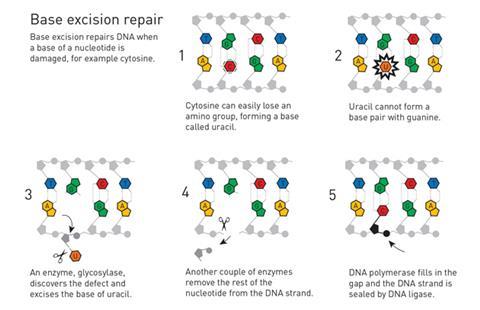 ‘It turns out that the DNA molecule, which encodes the genetic information in our cells … is frequently damaged,’ said Claes Gustafsson, a member of the Nobel committee for chemistry, during this morning’s announcement. ‘What these three prize laureates this year have done is that they have investigated and described in chemical detail important processes … that can correct these mistakes when they arise.’

But it has been a long road, one which the laureates started down at the end of the decade that had seen Watson and Crick awarded the Nobel prize in medicine for uncovering DNA’s structure in 1962. Lindahl, now based at the Francis Crick Institute, UK, dedicated his career to investigating the stability of bacterial DNA, correctly identifying that it decays over time and that there must be some form of repair occurring in the cell to prevent it. 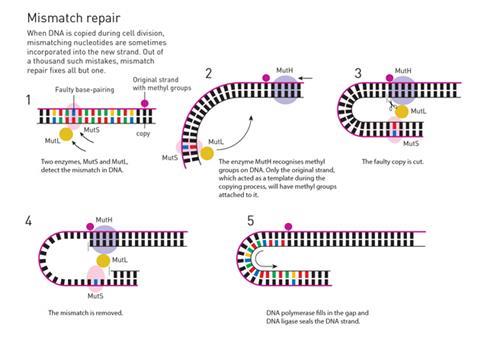 By 1996, working at the Clare Hall Laboratories in the UK, he had successfully identified this repair mechanism in human DNA. He discovered that the enzyme glycosylase can cut out a mutated base – in this instance a uracil produced by deamination of cytosine – from a DNA strand. A polymerase enzyme then fills in the gap in the DNA, correcting the error.

The repair mechanism is similar to the interaction mapped by Sancar from the University of North Carolina, US, who was able to expose the ways in which DNA responds to attack from UV radiation. In 1983, working with his colleague Dean Rupp at Yale University, Sancar revealed that the enzyme excinuclease was able to repair pairs of thymine bases that had fused following UV exposure. 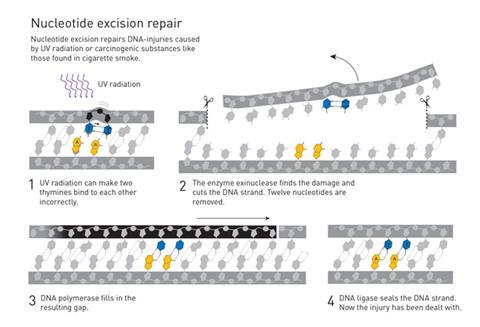 Modrich, now at Duke University, US, primarily focused on internal sources of damage – just as Lindahl did. Modrich examined how bacteria could repair DNA damage by engineering bacterial viruses with mismatched bases. By looking at how bacteria infected by these viruses realigned mismatched base pairs in the invaders, he realised that methyl groups on DNA strands that have been replicated act as signals for repair enzymes. These methyl groups flag up that one strand is the original and the other is a copy, letting the enzymes know which strand to rely on when making repairs.

Collectively, the three laureates’ research has helped molecular biologists to understand how cancers and hereditary diseases may spread throughout cells and why they are sometimes resistant to treatments such as radiotherapy.

But, for Gerrit Groenhof, a biomolecular chemist at the University of Jyväskylä, Finland, their award-winning work highlights something much more profound. ‘Just thinking of the enormous number of DNA bases in our genome and how easy UV light, or oxidants can destroy these bases, it is really amazing we are not totally mutated at the end of our lives,’ he tells Chemistry World. ‘This [year’s] Nobelists thought that too and set out to investigate why the genetic code can be preserved for so long – what they discovered is that, without a protein repair machinery, DNA is not stable at all.’

Tom Brown, a nucleic acid chemist at the University of Oxford, UK, and the 2014 Chemistry World entrepreneur of the year, agrees that the laureates have made a huge contribution to the field but suggests more questions need to be answered. ‘Today’s Nobel laureates are the pioneers; their seminal work has contributed hugely to the field,’ says Brown. ‘Yet despite these achievements, there is still much to learn about DNA repair. Importantly, the field is ripe for exploitation in the therapeutic context.’

Learn more about how Nobel prize winners are selected. Chemistry World talks to former chair of the selection committee for chemistry, Bengt Norden.