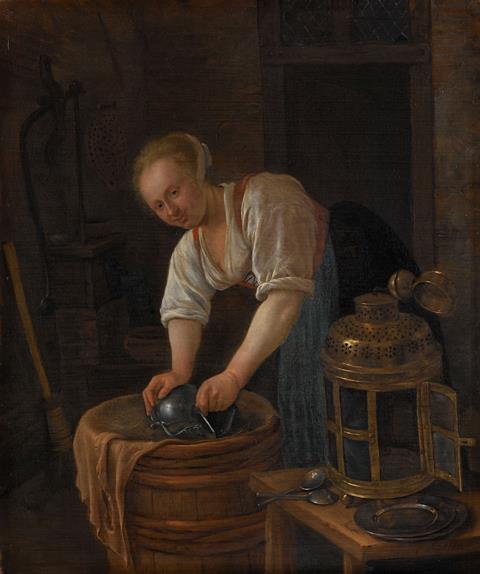 Prized for its deep blue colour and used in oil paintings since medieval times, ultramarine can lose its bright colour and become ‘sick’. Now, researchers have found that this phenomenon, called ‘ultramarine disease’, is likely caused by catalytic activity of the pigment itself. The finding could aid conservation of renaissance artworks.

Ultramarine was traditionally produced by grinding lapis lazuli rock from mines in Afghanistan into a fine powder and blending it with oils and waxes. It was the most expensive blue used by Renaissance painters and more precious than gold. However, a synthetic version was invented in 1826 making it far cheaper.

Ultramarine sickness – which results in the paint becoming a dulled grey-blue colour – occurs in both the natural and synthetic versions of the pigment. Previously, researchers assigned the malady either to pigment loss or to tiny cracks forming between pigment particles and organic binders in the paint causing light to scatter and dull the perceived colour – despite the blue pigment still being there.

‘If you look at the structure of ultramarine it makes complete sense it has catalytic activity, as it is a zeolite and analogous to commercial catalysts,’ explains Katrien Keune at the University of Amsterdam, Netherlands. The zeolites could be responsible for the pigment’s ‘disease’ by degrading the binder to produce the light scattering effect.

Keune first had a hunch that ultramarine could be catalytically active in 2006 when she artificially aged various oil paints that contained different pigments but which had the same linseed oil binder. The paint containing ultramarine was the only one that crumbled and results showed that the binder had completely degraded.

‘In the case of ultramarine, the “dull and flat” appearance is due to the degradation in the medium – the blue of the pigment is still there and the greyish appearance in the degraded ultramarine paint is part of the original paint,’ says Keune. 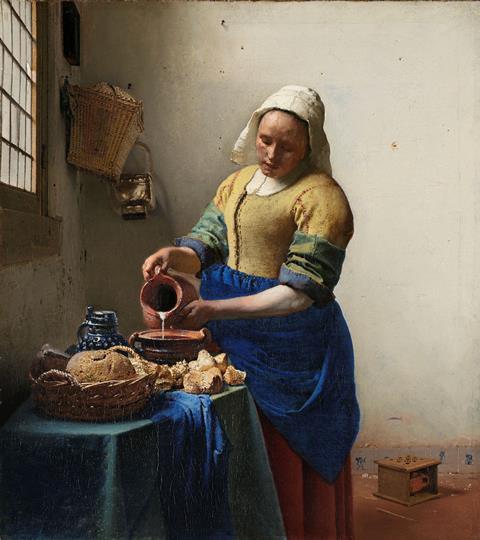 The ultramarine pigment in Johannes Vermeer’s The Milkmaid (c 1660) has maintained its original bright blue colour. It is unclear why some paintings suffer from ultramarine disease while others don’t

To explore ultramarine’s catalytic properties, Keune’s team prepared samples from lapis lazuli and obtained a synthetic commercial version. The chemists then carried out dehydration of methanol to dimethylether either in the presence of ultramarine or a quartz sand control.

When ultramarine was present more dimethyl ether was produced than with the quartz sand control, with a conversion rate that was nearly 12 times greater, indicating catalytic activity. Keune suggests that the oil binder in ultramarine could be degraded and oxidised due to the Brønsted and Lewis acid sites on the pigment’s cage structure.

Results revealed that synthetic ultramarine performed slightly better as a catalyst than that derived from lapis lazuli. However, the synthetic pigment particles had a surface area that was five times higher. When this difference was factored into calculations, the team showed that natural ultramarine was 4.5 times more catalytically active than the synthetic pigment. Keune suggests this is because natural lazurite-derived material contains more calcium cations than synthetic ultramarine, which are known to enhance conversion of ethanol to diethyl ether and ethylene.

‘That a pigment with a zeolitic structure such as ultramarine should act as a catalyst for the hydrolysis and oxidation of an oil paint binder makes perfect chemical sense,’ comments Jennifer Mass, who investigates pigment degradation at Bard Graduate Center, New York. ‘Keune’s group’s latest contribution is another example of how the identification of paint alteration mechanisms guides us in the preservation of irreplaceable works of art.’