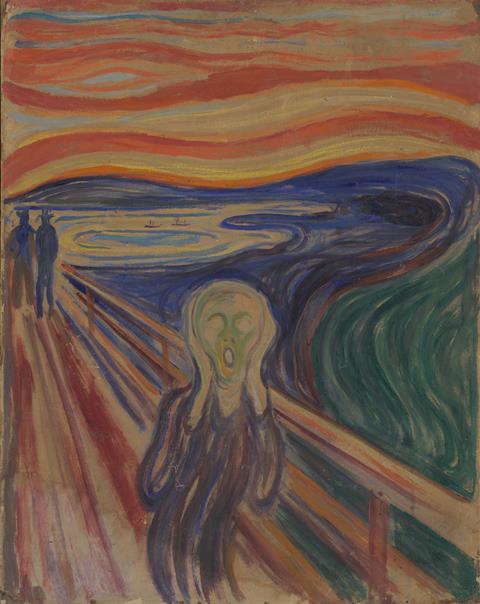 Humidity, not light, is the reason the bright yellow colours in expressionist artist Edvard Munch’s 1910 painting The Scream are turning white, chemical analysis has discovered.

Munch created a number of versions of The Scream including two pastels and two paintings. The 1910 painting is rarely shown in public now after it was stolen from the Munch Museum in Oslo, Norway, by armed gunmen in 2004. It was recovered with only minor water damage two years later and is now kept in a storage area at low light, 18°C and about 50% relative humidity. Still, in some areas the painting’s yellows are flaking off or fading to an off-white.

The pigments used in the yellow parts of Munch’s masterpiece are cadmium sulfide-based. Similar pigments in other artists’ paintings – like in Vincent van Gogh’s – have been found to degrade under light. But synchrotron x-ray microspectroscopy of tiny pigment flakes taken from The Scream has now revealed that the real culprit behind the fading colour is excess moisture.

In areas of degraded cadmium yellow, the researchers found large amounts of oxidised sulfur compounds, including cadmium sulfate, various sulfites and sodium sulfate – something that had never been reported before. While light has no influence on how quickly cadmium sulfide oxidises to its sulfate, high humidity accelerates the process. Keeping the painting at even lower humidity – less than 45% – would slow down degradation, the study concludes.