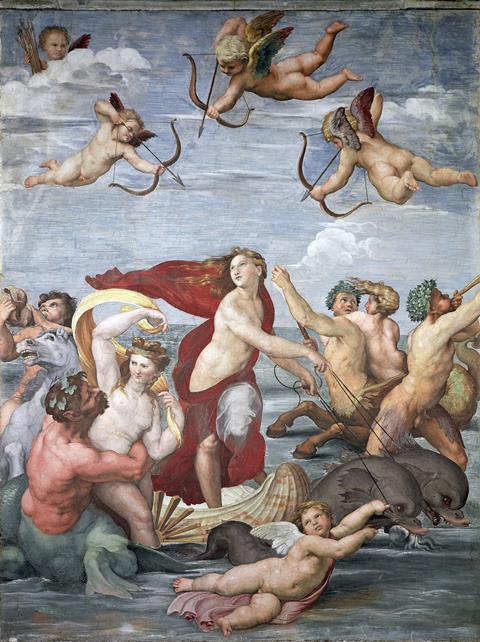 Triumph of Galatea by Raphael (c. 1512). Found in the collection of the Villa Farnesina, Rome. The pigment Egyptian blue is found in the sky, the sea and, suprisingly, the whites of the eyes of the figures in the painting.

The long-forgotten pigment Egyptian blue was used by the painter Raphael in a famous fresco, several centuries after the recipe for making it was thought lost, according to a new chemical analysis.

Scientists who studied the chemical composition of Raphael’s Triumph of Galatea, painted in 1514 on a wall of the Villa Farnesina in Rome, found evidence of Egyptian blue – calcium copper silicate – that the artist is thought to have synthesised through experimentation in his workshop.

The bright blue pigment was used in the blue sky and sea of the fresco, but also – curiously – in the whites of the eyes of Raphael’s portrayal of the sea nymph Galatea, says chemist Antonio Sgamellotti of the Lincei Academy in Rome, who led the research. 1

The Renaissance-era painter Raphael purposefully used an ‘ancient palette’ of pigments to paint the Triumph of Galatea, and it’s possible he recreated Egyptian blue for the purpose, Sgamellotti says. The ancient Greeks and Romans added a touch of Egyptian blue to white paint for the eyes to make them seem translucent and more natural, and it’s interesting to see the same technique being used by Raphael, says Giovanni Verri, a conservation scientist at the Art Institute of Chicago, who was not involved in the new research.

Verri has studied the extensive use of the pigment by the ancient Egyptians, who gave it its name. It was the most popular blue pigment used for painting by the ancient Greeks and Romans, but it became less widely used after that, he says.

More occurrences of Egyptian blue are now being discovered, however, as analytical technology improves and more paintings are studied scientifically, he says.

Egyptian blue is sometimes called ‘the first synthetic pigment’. It was originally made by carefully heating sand (mostly silicon) and crushed limestone (mostly calcium) with a source of copper (often metal scrapings) and an alkaline substance such as natron or ash.

But knowledge of how to synthesise it was thought lost after the 10th century, until the 19th century when it was ‘rediscovered’ in ancient paintings by the British chemist Humphrey Davy, who again determined how to make it.2

Sgamellotti says the researchers don’t know how Raphael made Egyptian blue hundreds of years after it was thought lost, but it may have been from his experimentation with an incomplete recipe for the pigment given in the writings of the first century BC Roman architect and engineer Vitruvius. That recipe famously overlooked the importance of calcium as an ingredient for Egyptian blue, possibly because the sand used for its manufacture near Naples in his time already contained enough calcium.

Raphael wrote to a friend that he had received ‘great help’ from Vitruvius when painting the fresco, Sgamellotti says. ‘We think that this could be the source of Raphael’s experiment.’

Egyptian blue pigment has also been found in three other Italian Renaissance paintings.3 They date from about 10 years after Raphael’s fresco, but it’s not known if they had found the same method of making it, Sgamellotti says.

Instead, it could be that Egyptian blue was not quite as forgotten in Renaissance Italy as some have supposed, says conservation scientist Jørn Bredal-Jørgensen of the Royal Danish Academy of Fine Arts in Copenhagen, who was not involved in the study. ‘My personal opinion is that the production technology survived locally, and the gap in the historical record will diminish when new finds are published,’ he says. ‘Hopefully, we might even be able to localise the production sites.’