A machine learning algorithm developed by US researchers can speed up the discovery of materials with desirable properties. Screening a database of over 100,000 compounds, computers predicted the most promising superhard materials, which the team confirmed by synthesising two of the best candidates.

Superhard materials are classed as anything with a hardness higher than 40 gigapascals, measured using the Vickers hardness test. They are used for various engineering and biomedical applications, including drills, cutting tools and artificial joints. They are often expensive and difficult to make, requiring extreme temperatures and pressures or containing heavy transition metals.

Finding new materials usually requires lengthy trial-and-error research, but Jakoah Brgoch’s lab at the University of Houston in Texas has shown that machine learning might enable a more targeted approach.

‘We were able to eliminate the typical trial and error in experimental endeavours by picking two new compounds with outstanding hardness based on our algorithm,’ explains Brgoch. ‘What machine learning allowed us to do was look beyond all of the other compounds – I like to think of it as seeing through the noise – and focus our efforts on materials that we were confident would produce the mechanical response we desired.’ 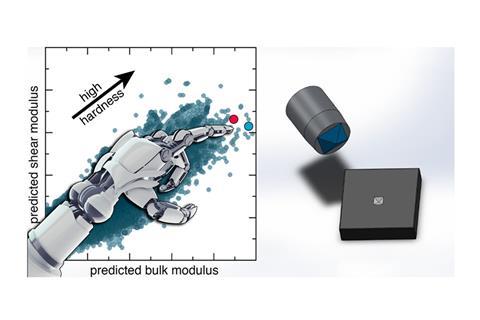 While machine learning has been applied to predict the properties of materials before, it has remained a challenge to use it for predicting hardness. That is because hardness is a complex property, not only depending on the chemical composition of a material, but also the way it is made and subsequently processed or treated.

To get around this, Brgoch’s team used a proxy for hardness, by training the algorithm to predict intrinsic mechanical properties that directly relate to hardness, including bulk and shear modulus. In under 30 seconds using conventional desktop computers, the machine learning algorithm screened the crystal structures of more than 118,000 materials, using its ability to learn to identify compounds that have a high bulk and shear modulus, indicating potential superhardness.

The algorithm’s results guided the researchers towards two materials – a rhenium tungsten carbide and a molybdenum tungsten borocarbide – which they subsequently synthesised and discovered to be close to the superhard threshold. ‘With some additional improvement we might be able to push them across that border and make them unequivocally superhard,’ says Brgoch.

Although these materials and their crystal structures were previously reported, little was known about their properties. ‘The fact that we are currently limited to picking already known materials is something we are working on. In the future we would like to predict entirely new compounds that have never been reported before,’ adds Brgoch.

Aron Walsh, who investigates materials at Imperial College London in the UK, says the work provides ’a timely example of how computational chemistry is changing by using results from quantum mechanical calculations that train statistical models to make wider predictions’.

’The resulting ultra-hard intermetallic compositions are not something that could have been easily discovered using conventional screening procedures,’ he adds.