Malaria drug could cash in on green chemistry 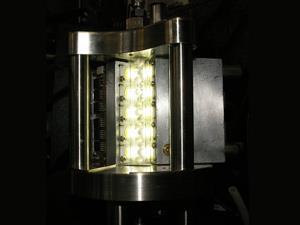 Green chemistry principles could make synthesising the frontline antimalarial drug artemisinin both cleaner and cheaper, an industry–academia collaboration suggests. The study carries particular weight as it involves chemists from French pharmaceutical company Sanofi, which started semi-synthetic artemisinin production in 2013. Current commercial output is up to 60 tonnes per year, roughly one-third of global demand. ‘The process works really well, but is still quite expensive,’ said Martyn Poliakoff, one of the scientists behind the new greener synthesis, in a YouTube video.

Most artemisinin is still extracted from the sweet wormwood plant, but Sanofi’s process converts glucose to artemisinic acid using genetically modified brewer’s yeast. From there, it faces the difficult challenge of introducing three oxygen atoms, two bonded to each other, to produce artemisinin.

Poliakoff, who believes that he failed his final undergraduate organic chemistry exam, was convinced by his Nottingham colleague Mike George to help improve Sanofi’s process. They then set out to tweak the process to avoid the use of toxic dichloromethane and TFA. In their first attempt, the chemists use cheap, renewable and non-toxic liquid carbon dioxide as their main solvent in a flow reactor. They also immobilise a photocatalyst on common Amberlyst 15 polystyrene ion exchange resin, which, as it is acidic, can replace TFA.

Control experiments for this approach inspired a second strategy thanks to a chance discovery that, while it was impossible to form artemisinin in distilled tetrahydrofuran, the reaction worked well in non-distilled tetrahydrofuran. The implication was that residual water is beneficial, somewhat counterintuitively, as it’s known to shorten singlet oxygen’s lifetime. ‘Water has properties that push the molecules together and help them react faster,’ Poliakoff explained. 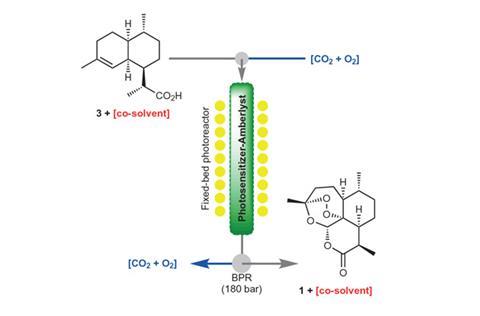 Introducing water means cheap sulfuric or phosphoric acid can replace TFA, and enables the use of a water-soluble photocatalyst. Most importantly, using aqueous ethanol may nudge the artemisinin yield beyond the 55% achieved in industrial processes.

‘The real beauty of the experiment is that we discovered that at the end, if you evaporate off some of the ethanol, the pure product precipitates out,’ Poliakoff says. ‘The ethanol you’ve distilled off, the remaining water, the acid, can be recycled. The product is so pure we actually took one crystal and went straight to the crystallography lab next door, and they produced the crystal structure in an hour and a half.’

Michael Oelgemöller, who studies green photochemistry and microflow photochemistry at James Cook University in Townsville, Australia, points out that producing liquid carbon dioxide is comparatively energy-intensive and that aqueous solvents are therefore ‘obviously better’. Oelgemöller also adds that green chemical principles ‘may ultimately not be that relevant’ for antimalarial drugs. Instead, he emphasises that more cost-effective production ‘is of fundamental importance’ – and the new study doesn’t reveal any details in that area.