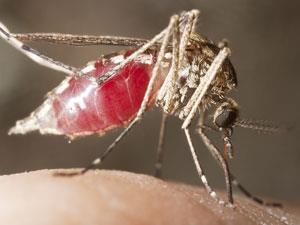 The malaria parasite carried by mosquitoes kills millions every year

Erratic supplies of a critical chemical have long denied millions of people in the developing world the malaria therapies that could save their lives. Now an effort to create a more reliable source is finally bearing fruit.

On 11 April, the Paris-based pharmaceutical company Sanofi officially launched a new production facility in Garessio, Italy, to make artemisinin – the precursor to artemisinin-based combination therapies (ACTs), the most effective drugs against the deadliest malaria parasite.

Until now, the only source of artemisinin has been the sweet wormwood plant mostly grown in China and Vietnam. But variable harvests and a production cycle lasting at least 14 months have created a volatile market where prices and availability fluctuate wildly. ‘Not everyone could get the drugs they needed,’ says Ponni Subbiah, a drug-development programme leader at PATH, a global health organisation based in the US.

Sanofi expects to make about 35 tonnes of artemisinin this year, and 50–60 tonnes next year, which will meet about one-third of the global need. It will initially cost $350-400 (£230 –260) per kilogram, roughly the same as the botanical source. Pending final approval from the World Health Organization, drugs made this way should be on pharmacy shelves around the end of this year, Subbiah reckons. ‘Having a more stable supply means that more people will get the drugs,’ she says.

Instead of relying on sweet wormwood, Sanofi’s process uses genetically-engineered yeast that metabolise glucose into artemisininic acid, a few chemical steps away from artemisinin itself. Scaling-up the process cost the French pharma giant the relatively modest sum of €15 million (£12.9 million). And the ‘semi-synthetic’ process has been widely hailed as a triumph for synthetic biology – but it also required some innovative chemistry to push it over the finish line.

The yeast was born in Jay Keasling’s lab at the University of California, Berkeley, and developed by a team that included researchers at Amyris, the biotech company he co-founded. They published the technical details of their yeast, along with the chemistry to transform it into artemisinin, mere hours before the Garessio announcement.1 Yet even though Sanofi is using the same yeast fermentation process, ‘the chemistry process is completely different than the route provided by Amyris’, says Philippe Charreau, associate vice president of chemistry and biotechnology development at Sanofi.

When Sanofi started working on the project in 2008, the conversion of artemisinic acid to artemisinin had a yield of about 20% over four steps. Changing reagents offered some initial improvements: switching a rhodium catalyst for ruthenium, for example, improved the diastereoselectivity of the initial hydrogenation of artemisinic acid.

But the biggest problems lay in the last step – forming a tricky endoperoxide bridge using reactive singlet oxygen (1O2). Amyris’s method, which generated 1O2 from concentrated hydrogen peroxide, was strongly exothermic and could not be scaled up for safety reasons, explains Charreau. 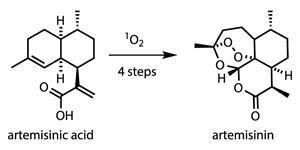 When his team suggested using photochemistry to generate 1O2 from air, Charraeu was sceptical. The chemistry is well known, and photochemistry can be very fast and efficient – but it is rarely used on an industrial scale because larger batches of reactants need longer periods of irradiation, which triggers a variety of side reactions that create hard-to-purify mixtures.

‘But I trusted them, and they were right,’ says Charreau. His team overcome the problems by fine-tuning the spectrum of the light source, and designing a reaction vessel that optimises the reaction mixture’s exposure to light. The Garessio facility has three of these reactors: nested layers of glass that stand a few metres high, illuminated from within by an intense green light. The overall yield of artemisinin from artemisinic acid is now more than 55%. ‘In principle, it proves you can use photochemistry to make pharmaceuticals,’ says Charreau.

‘I think Sanofi scaling up the photochemistry was a real tour de force,’ says Peter Seeberger, director of the Max Planck Institute of Colloids and Interfaces in Potsdam, Germany. ‘But there’s still room for improvement in the process – it’s not the last word.’

Seeberger has been using similar photochemistry to produce artemisinin in a continuous flow process. In March, he showed that dihydroartemisinic acid – a waste product from sweet wormwood processing – can be photochemically converted to artemisinin in 65% yield.2 Seeberger co-founded a company, ArtemiFlow, in October 2012 to develop this chemistry, and he says that a bench-top reactor can potentially produce about one tonne of artemisinin per year. He is now working on a 10-fold scale-up.

‘I think that flow chemistry can give a higher yield, a more efficient process, at lower costs,’ he says. Continuous flow chemistry requires smaller reactors than Sanofi’s batch process, potentially cutting capital costs. ‘I’m confident we can show that our process is more than competitive,’ Seeberger says.

Meanwhile, other chemists suggest that Keasling’s yeast could eventually be replaced. Last year, Silas Cook at Indiana University, US, unveiled the shortest total synthesis of artemisinin to date, a reaction sequence requiring just five purification steps.3 ‘The Sanofi process is more efficient than ours,’ Cook concedes. But his synthesis offers a blueprint for directly making ACT ingredients such as artesunate or artemether in the same number of reaction steps. ‘That offers a versatility not provided by the Sanofi synthesis,’ he says.

However, Phil Baran of the Scripps Research Institute in La Jolla, US notes that Sanofi’s artemisinin production ‘still relies on chemistry to come through’. Biological processes will often win out over synthetic chemistry when making relatively simple molecules such as artemisinic acid, he adds, but more complex structures still demand chemists’ intervention. ‘I still haven’t seen anything that’s going to put chemical synthesis out of business.’