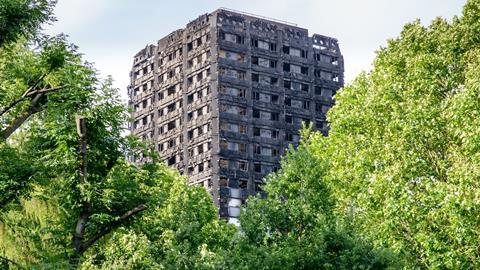 The Grenfell Tower fire in the UK has shone a spotlight on building materials – and how fire retardant they are – after initial analysis suggested the rapid spread of the blaze was aided by the combustible filler used inside panels of aluminium cladding on the building’s exterior.

On 14 June flames ripped through the west London block’s 24 storeys, killing at least 80 people and injuring dozens more. As footage showed fire rapidly travelling up the outside of the building, attention quickly shifted to the cladding that had been fitted in a recent refurbishment.

The kind of cladding used at Grenfell is extremely common, says David Metcalfe, director or the UK-based Centre for Window and Cladding Technology. ‘It consists of two half millimetre thick sheets of aluminium with a core material between them. The issue in this case was that the core material used was polyethylene, and polyethylene is combustible.’

It might not be that the regulations are faulty

He adds that ‘limited combustibility’ versions of the same material – essentially polyethylene that have fire retardants added to them, are available, but it appears that in the case of Grenfell Tower, and many other buildings around the UK, the simple, non-fire retardant filler material was used, meaning the only fire resistance comes from the surrounding metal layer.

‘If the [building’s] steel frame is burnt it will buckle. Once it is bent, the way the panels are fitted will change shape, and by changing that shape the flames will have access to the interior material, which will burn,’ explains Konstantinos Tsavdaridis, a professor of structural engineering at the University of Leeds, UK. Coated polyethylene cladding of this type has been linked to the rapid spread of tower block fires in the past – in France, Australia and Dubai, for example.

The disaster prompted the UK government to call for widespread testing of cladding samples from hundreds of tower blocks around the country. In the vast majority of cases – at last count, 190 out of 191 samples submitted – the samples have failed these tests, leaving councils with a dilemma over what to do with buildings that have retrospectively failed fire safety tests.

Although the government has not disclosed exactly what these tests involve, they are likely to be simple ‘furnace’ tests where a piece of the cladding panel – or individual materials in isolation, such as the polyethylene – are heated to see at what temperature they burn. This kind of test, although well meaning, oversimplifies what is actually a complex issue, says Tsavdaridis.

‘The most realistic way of understanding how any structural element will behave is by doing the proper fire reaction tests at ambient environment,’ he says. ‘So we’ll have a floor, or a couple of floors, we have the full [cladding] system there including the steel, the insulation materials, the aluminium boards, and let the fire go so we see in which direction the flames are actually burning the elements.’

There is, however, currently no obligation for the companies that produce building materials to put their products through this kind of advanced testing. This needs to change, says Tsavdaridis. ‘There is a need for more realistic testing,’ he adds. ‘[The authorities should] look at the protocols for updating the testing processes that companies have to undergo in order to put these kind of products on the market.’

The building regulations covering which materials should and should not be used have also come in for criticism in the aftermath of the Grenfell fire. The government has said that buildings whose samples fail the combustibility tests do not comply with current regulations.

But Metcalfe argues the regulations are poorly worded. ‘Why was [this cladding] on the buildings in the first place?’ he says. ‘The answer we think is that the regulations aren’t clear, the guidance document doesn’t specifically say you can’t use this stuff […] that cladding didn’t need to meet any requirements in terms of its combustibility, therefore it was probably used in good faith, and that was the interpretation that the whole industry had.’

Tsavdaridis agrees there is a ‘long list’ of different regulations that need to be updated. ‘Anything from how we design these kinds of tall buildings, how we repair and retrofit old buildings like Grenfell Tower, what kind of tests need to be done before any sort of structural or non-structural elements are used for the rehabilitation of the building,’ he says. 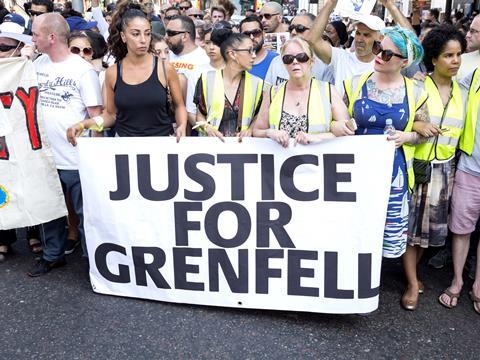 Residents and protestors have been asking why flammable cladding with a polymer core was used at Grenfell Tower. There may be no simple answer to whether regulations were broken and, therefore, if any party is culpable for the fire

However, Claire Benson, a fire and explosion specialist at London South Bank University, argues that the enforcement of regulations is an equally important consideration. ‘It might not be that the regulations are faulty, it might just be that people weren’t doing what they were supposed to be doing and nobody noticed,’ she tells Chemistry World. ‘There is a section in the regs that says that for buildings over 18 metres any insulation or “filler” material has to be of limited combustibility – I read that as being pretty much anything you use on the outside.’

‘You used to have to have fire inspections by the authorities to check that everything was all right and we don’t have that anymore, so it’s been entirely put in the hands of people who own the buildings.’

Benson adds that focusing on a single building material is also problematic. ‘There’s a whole swathe of things they’ll need to look at in terms of how it was used, where it was used, what it was used with,’ she says. ‘For example, I’ve seen some councils who are now taking cladding down, but they’ve used it with [uncombustible] rock wool insulation behind, whereas at Grenfell it was used with [combustible] insulation. So while I don’t think this cladding should be anywhere near a tall building, there are different degrees of danger. They’re going to have to examine all of that in every case where this has been used on a building.’

Tsavdaridis adds there are many other factors which contributed to the spread of the fire at Grenfell Tower – including the lack of sprinklers and bad vertical ‘compartmentalisation’ between different floors. Even the ambient environmental conditions could have had an effect. ‘It’s important to look at the whole system,’ he says. ‘Rather than just a material.’