Mineral plastic made into fireproof foam

Pre-gelation strategy could be key to non-combustible insulation materials

Scientists in Germany have developed a readily recyclable solid plastic foam with a remarkable property – it does not burn.1

Plastic foams are widely used as insulating materials on buildings and equipment. The presence of air cavities is key to impeding the transfer of heat and sound, as well as making the materials light enough to be practical. But a serious drawback is that most plastics are flammable. Combustible cladding contributed to the uncontrollable fire at Grenfell Tower in London, UK, which claimed 72 lives in 2017, and authorities are scrambling to replace similar unsafe cladding on other buildings.

Research led by Cosima Stubenrauch at the University of Stuttgart and Helmut Cölfen at the University of Konstanz offers a potential solution. The scientists have succeeded in foaming mineral plastic – a material previously developed by Cölfen and colleagues,2 which combines polyacrylic acid with calcium carbonate to achieve fireproof properties. 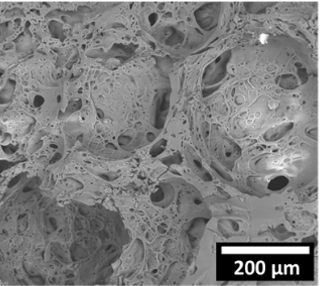 ‘If you burn it, or try to burn it, then it just gets black, because the polyacrylic acid just decomposes, but also the calcium carbonate releases carbon dioxide. So the carbon dioxide acts as an additional fire extinguisher,’ says Cölfen.

To make mineral plastic into foam form, the researchers’ strategy was to produce a foamed hydrogel, which they could then dry into a rigid structure. But the hydrogel’s high viscosity, akin to chewing gum, posed a problem.

‘You can imagine blowing air into chewing gum is difficult,’ says Stubenrauch. ‘So, we had to find a way to decrease the viscosity of this mineral plastic, and have a state in which we can easily pump air into the system, and then we need to go back to the mineral plastic state. So this was the tricky part.’

To form this low-viscosity precursor, the scientists mixed polyacrylic acid, calcium chloride and a non-ionic surfactant. Air is then stirred in prior to addition of ammonia to raise the pH, after which calcium carbonate forms through diffusion of carbon dioxide from the air. The dried foam is non-combustible, and as an added benefit, can be easily recycled by dissolving in acid.

Sebastijan Kovačič, a polymer scientist at the National Institute of Chemistry, Slovenia, is enthusiastic about the development. ‘They are not the first to have thought about it, but they were the first to actually implement it and I like it very much. Although the road to practical application of these foams in building insulation is still long, we can now at least imagine what the material of the future is in this field.’