US researchers say that they could cut the energy needed to separate two xylene isomers, which differ only slightly in shape, by up to 95%.Para-xylene is an important feedstock in plastic manufacturing and substantially cutting the energy used to separate the isomers could save industry huge amounts of money and cut its carbon footprint. 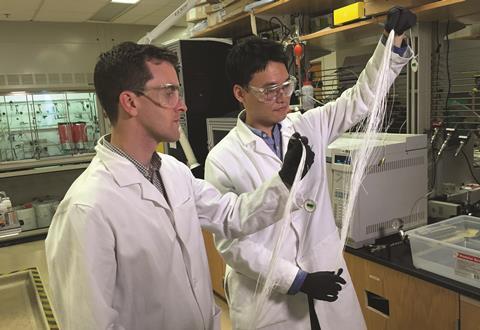 Normally in osmosis, liquid solvent moves across a membrane from a lower concentration solution, diluting a higher concentration solution on the other side. Applying sufficient pressure reverses this, increasing the difference between concentrations. Today, reverse osmosis dominates desalination of seawater, as it uses roughly a tenth of the energy of rival distillation processes.

Lively estimates that separation and purification account for around half the energy consumed in producing speciality chemicals and fuels. ExxonMobil had explored using reverse osmosis to reduce this, he adds, but stopped in the late 1990s, defeated by the challenge. ‘Membranes either can’t stand the pressures or solvents, or don’t have the specificity to tell very similar hydrocarbons apart,’ he stresses. Yet, Lively was ‘fairly confident’ when he approached ExxonMobil. ‘I had a trick up my sleeve,’ he says.

He turned to carbon molecular sieve (CMS) membranes, which are already used to separate gas mixtures. They’re made by pyrolysing polymers at several hundred degrees Celsius. However, micrometre-size pores in the poly(vinylidene fluoride) (PVDF) starting polymer fibres Lively’s team use usually collapse during pyrolysis, blocking the sieves. Lively’s trick was crosslinking PVDF before pyrolysis, which reinforces the fibres and creates nanometre-size pores on their surfaces that let para-xylene through, but not ortho-xylene.

Using crosslinking to prevent porosity loss during pyrolysis is an ‘inventive approach’, comments Kim Jelfs from Imperial College London, UK. ‘It would be interesting to understand in more microscopic detail how their approach affects sieve structure and xylene molecules’ diffusion,’ she adds.

Adoption of this technology will be slow, Lively admits. His team still has much to do, such as improving their membrane production technique and studying more complex mixtures. Even when the method is ready, it will take years to build plants exploiting it. However, he hopes the technology will emulate reverse osmotic desalination’s steady progress from its first breakthroughs in the late 1960s and 1970s to becoming the gold standard technology.