Scientists in the UK and Malaysia have disclosed the research behind a fast and safe commercial technology for removing mercury from natural gas. The technology is the first solid-supported ionic liquid to be used at an industrial scale, and its development, from laboratory to full plant operation, took just four years.

The vast volume of natural gas that is processed annually by industry contains a pernicious contaminant – hundreds of tons of mercury. This corrosive metal is intrinsically present within hydrocarbon deposits, and it must be removed to mitigate catastrophic damage, not only to the environment but also to the gas-processing plants.

An explosion at the Skikda liquefied natural gas plant, Algeria, in 1973, is a poignant example of inadequate mercury removal. Mercury caused damage to equipment that resulted in 27 deaths and financial losses of $1 billion. Good mercury removal technology is therefore vital in this industry.

The underlying research suggests that HycaPure Hg has a lifetime of up to three times that of commercial alternatives (such as sulfur-impregnated activated carbon). This could represent a substantial saving for mercury removal units, which each cost around $180,000 per fill. Downstream equipment is also protected during mercury level fluctuations by the technology’s rapid mercury capture kinetics.

‘This is a wonderful application of ionic liquids at the industrial level’, says ionic liquids specialist Hiroyuki Ohno, from Tokyo University of Agriculture and Technology, Japan. He also praises the technology’s ‘rapid development from the laboratory to full industrial scale’. This transition – from grams to tons – took just four years.

‘In our industry, it would typically take 7–10 years to get innovations to market, with stage gates and milestones in sequence,’ explains Atkins. However, the collaboration’s unconventional approach allows multiple milestones to be worked up in parallel, in the laboratory and the commercial setting simultaneously. This might be a simple concept, but its implementation was highly complex. Atkins describes how there was initially no manufacturer that could support scale-up of the discoveries made in the lab, and the work eventually involved more than 7 international partners.

The team’s collaborative approach helped them to win the Royal Society of Chemistry Teamwork in Innovation Award, which ‘recognised exactly what made the project happen. Genuine teamwork’, says Seddon, ‘to develop “green” chemistry that helps the planet’. 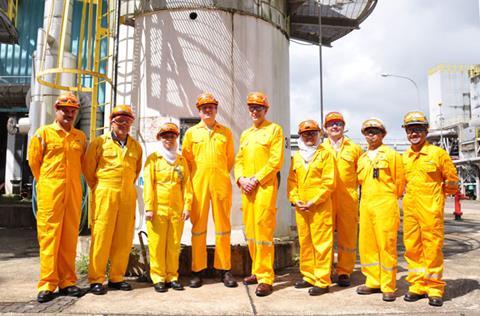 The team in front of a full scale mercury removal unit

Ionic liquids have previously generated much excitement, but also some fierce criticism owing to some being toxic. However, Tom Welton, an expert in sustainable chemistry, from Imperial College, London, UK, points out that mercury removal justifies the use of ionic liquids: ‘What matters is that the team have solved a very large scale industrial and environmental problem, not whether the ionic liquid itself is seen in isolation as being ‘green’.’

A global marketing agreement between Petronas and speciality chemicals company Clariant means that the Quill team cannot be involved with any future developments of HycaPure Hg. ‘This is sad in one respect’, says Atkins, ‘but it leaves us free to do other things’. So, what does this ground-breaking team have in-store for the future? In answer, a jovial Seddon simply says ‘you don’t really expect us to tell you that, do you?’