Ever since it was first predicted in 1935 that hydrogen could take on a metallic form under immense pressure, the quest to find it has been littered with false and disputed claims. The latest chapter in this saga is, then, an understandably cautious one. Two veterans of high pressure physics, Russell Hemley of the George Washington University in Washington DC and John Tse of the University of Saskatchewan in Canada, and their colleagues have mapped out where crystalline hydrogen at high pressure melts to a liquid when heated.1 And they report spectroscopic evidence for a new high pressure crystal phase which they think might correspond to one previously predicted by quantum calculations – a phase that calculations show to be metallic. 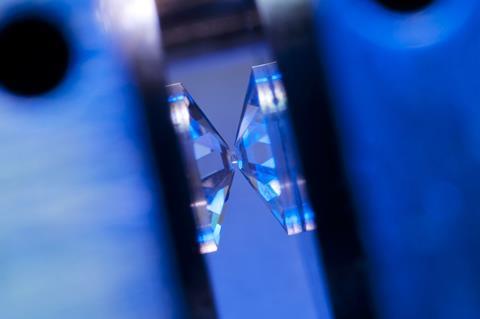 The original prediction of metallic hydrogen by Eugene Wigner and Hillard Huntington was based on the argument that if the molecular solid was compressed to the point where all the hydrogen atoms were equidistant and identical, the material was bound to become metallic, with no band gap between the electron-filled valence band and the empty conduction band. But Hemley says that their new results, taken together with earlier experimental and theoretical studies hinting at metallic behaviour in liquid and solid forms of very dense hydrogen, point to a more complex picture with several different metallic states.

Studying materials under these extreme pressures is typically done either using shock compression – basically a kind of explosion that rapidly and fleetingly compresses the sample – or by using a device called the diamond anvil cell (DAC), in which the sample is squeezed between two diamond ‘teeth’. But getting an unambiguous view of the sample, and knowing what the pressure is, are both challenging in DAC work. Such uncertainties dogged a recent claim2 by researchers at Harvard University to have seen the Wigner-Huntington transition to metallic hydrogen.

Hemley and colleagues now claim to have accessed a previously inaccessible part of phase space for dense hydrogen, reaching pressures up to 300GPa while warming the apparatus to as much as 900K. Hemley says that this is partly a matter of finding the right teeth. ‘The diamond anvils were carefully selected and polished in our laboratory in order to withstand heating at these pressures,’ he says. Some groups have placed a hard surface coating on their diamonds to stop hydrogen from diffusing into them, but Hemley and colleagues chose not to, saying that this risks introducing spurious spectroscopic signals from the coating.

It will be exciting when the experiments can probe solid metal hydrogen, as it almost certainly will be a room temperature superconductor

The researchers studied their hydrogen samples using Raman spectroscopy to look at vibrations of the atomic lattice. Changes in these vibrations denote transitions in the solid phase, while all the vibrations vanish when the sample melts. Hemley and colleagues could follow the melting transition at pressures of 100 to 300GPa, where the melting temperature is about 600–650K.

Some of this ‘melting line’ has been mapped out before,3 but Hemley and colleagues found a kink in it around 140GPa, which suggests the formation of a new solid phase. Hemley says there are probably others at even higher pressure. ‘All previous estimates above 140GPa were based on extrapolations of experimental data or theoretical calculations,’ he says. ‘Our results demonstrate that in situ measurements are needed.’

Taken together with earlier studies, the findings imply that there may be four or more solid phases at these pressures – some highly metallic, others weakly so. In particular, the researchers saw a new Raman peak appear at 300GPa and temperatures of more than 373K. To figure out which phase might be responsible, they calculated the Raman spectra for various crystalline forms previously predicted theoretically under these conditions, and found that one of these – a metallic phase – had a peak at much the same frequency. Could this be what they were seeing?

One odd thing about these results, says Eugene Gregoryanz of the University of Edinburgh, UK, is that the experimental Raman peak doesn’t seem to shift with pressure, as one would expect it to. Besides, ‘the calculation is not accurate enough to make a confident identification’, says condensed matter physicist David Ceperley of the University of Illinois at Urbana–Champaign, US. ‘The free energy differences between the phases are quite small, so a conclusive determination will need more accurate measurements and calculations.’

‘It will be exciting when the experiments can probe solid metal hydrogen, as it almost certainly will be a room temperature superconductor,’ Ceperley adds. But to do that, ‘they will have to go above 400GPa’, he says.

Hot, dense, metallic hydrogen is predicted to exist in the cores of gas giant planets such as Jupiter – but there it will be much warmer than here. Still, says Hemley, ‘we cannot rule out the existence of hydrogen-rich planetary bodies with cooler interiors to which our new data directly correspond’.

What’s more, says Ceperley, such experiments offer a testing ground for exploring those greater extremes. ‘If we can successfully predict and measure the solid phases of hydrogen at these conditions, then it gives some confidence that we can do so at higher temperatures.’