Researchers in Australia and New Zealand have grown metal crystals that bear an ‘uncanny similarity’ to snowflakes. Like their icy counterparts, the metallic flakes demonstrate striking and diverse symmetrical patterns. Understanding how to control the structures that materials like these take on could help researchers develop new nanomaterials with specially tailored physical properties.

Snowflakes are famous for their fascinating six-sided patterns. These orderly structures are formed due to the hexagonal way in which water molecules arrange themselves onto the growing ice lattice. 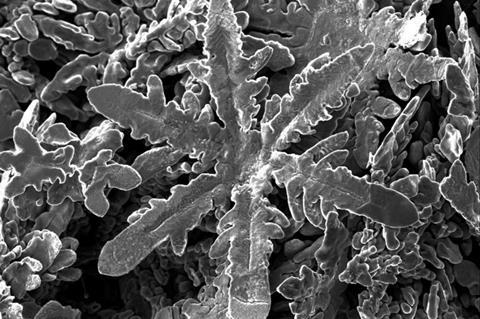 This metallic snowflake was grown in a gallium solvent

A team led by the Royal Melbourne Institute of Technology’s Torben Daeneke, University of New South Wales’ Kourosh Kalantar-Zadeh and University of Auckland’s Nicola Gaston has now mimicked this natural process in metallurgical systems. They began by producing zinc crystals from a gallium liquid metal solvent. The experiments were then extended to other metal solutes, including tin, bismuth, silver, manganese, nickel, copper, platinum, as well as a combination of manganese and aluminium.

Like snowflakes, the metallic flakes were able to form different types of structures, including dendrites, plates, fractals, prisms and needles.

The researchers were able to show that the lattice structure of the crystal nuclei and its interaction with the gallium solvent were key to determining the shape of the final flake. ‘What we are learning is that the structure of the liquid gallium is very important,’ Gaston told the University of Auckland’s website. ‘That’s novel because we usually think of liquids as lacking structure or being only randomly structured.’

‘In contrast to top-down approaches to forming nanostructure – by cutting away material – this bottom-up approaches relies on atoms self-assembling,’ added Gaston. ‘This is how nature makes nanoparticles, and is both less wasteful and much more precise than top-down methods.’