Millions of metal nanoparticles hot off the printing press 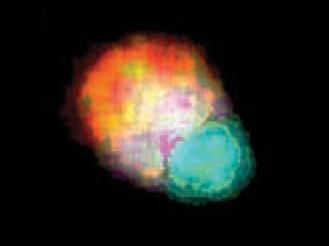 Scientists in the US have designed a printing press that can produce millions of different metal nanoparticle alloys in a single pass. These diverse nanoparticle libraries may offer researchers a way of quickly finding a material tailored to their needs.

Over the past few decades, metal nanoparticles, mainly silver or gold, have been used in a whole host of applications, be it in imaging, therapeutics or catalysis. Mixed nanoparticles, however, may offer superior performance over their single metal counterparts.

But making them is a tricky business. Researchers often have to rely on bulk synthesis or intricate microfluidic systems to eke out a small number of particles, before they can see whether they are even suitable for a desired application.

‘Right now we do it based upon intuition and a serial attempt at making different types of structures,’ explains Chad Mirkin from Northwestern University. He adds that these ‘attempts are really quite limited when you go to the multi-element-type particles’.

Mirkin’s group has now developed a technique that can produce a library of alloyed and mixed nanoparticles that vary in both size and composition. ‘It’s a very simple concept,’ says Mirkin. ‘We have these arrays of pyramids that are made out of an elastomeric material and they’re mounted on a flat, transparent substrate – think of it as a stamp of pyramids.’

This pyramid or pen array, which can contain up to 11 million pyramids, is dip coated in poly(ethylene oxide)-b -poly(2-vinyl pyridine). This polymer ink, as Mirkin calls it, also contains metal precursor salts, including silver, gold, copper, cobalt, nickel or a combination of two or more metals. Once dip-coated, the stamp is brought into contact with a flat surface, such as a transmission electron microscope (TEM) grid, and millions of 1x10-18 litre ink droplets are deposited.

The droplets were then heated to 120°C in argon, forcing the metal salts to aggregate in these polymer reactors. Further heating under hydrogen leads to the polymer decomposing and leaving an individual metal nanoparticle behind.

The size of these particles can vary depending on how hard the stamp is initially pressed into the surface or whether the array is tilted. Mirkin’s team can also load the ink with different salt combinations to create a range of metal nanoparticles from pure gold to a particle containing all five metals. ‘The vast majority of the structures from the ternary through to the quinary have never existed on the planet before,’ comments Mirkin. The group is also able to characterise each particle under a TEM.

‘It’s really spectacular chemistry in the sense that you’ve got one of the world’s smallest flasks or beakers … defined in the polymer pen lithography experiment,’ says Mirkin. ‘For anybody interested in rapidly finding new compositions of nanomaterials that fit their needs or desires in terms of an application, this is a phenomenal tool for doing that.’

Raymond Schaak, a nanomaterials chemist from Penn State University, US, agrees with Mirkin’s sentiment. ‘Many of these nanoparticle configurations have not been accessible using other methods, so this work opens the door to systematically screening and studying a large number of new systems,’ Schaak tells Chemistry World. ‘The diversity of multi-element nanostructures that can be accessed is unprecedented.’