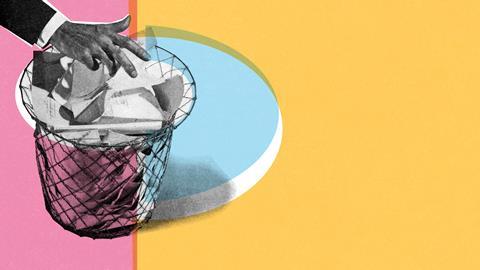 Misconduct not mistakes are the chief reason chemistry papers are retracted

Most retracted chemistry papers are removed from the literature as a result of academic misconduct, such as plagiarism and falsified data, rather than ‘honest mistakes’, a study of retractions in 2017 and 2018 has shown. 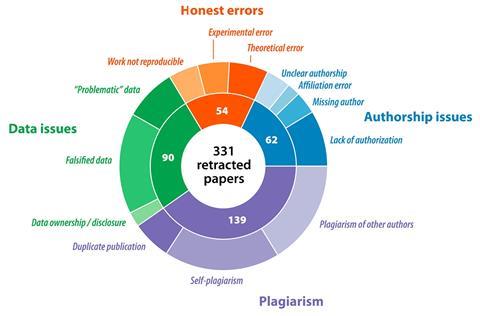 François-Xavier Coudert, a theoretical chemist at the French National Center for Scientific Research, used Elsevier’s Scopus database to identify 331 retracted papers in chemistry or materials science, and analysed the reasons given in the retraction notices. Of these, 139 (42%) cited plagiarism – including duplicate publication and self-plagiarism – and 90 (27%) cited data issues, such as falsified data or data that was vaguely described as ‘problematic’.

‘I’ve been interested for a bit of time in the practices of publishing and their interaction with misconduct,’ says Coudert, who has publicly criticised ‘cryptic’ retraction notices in the past. ‘I really expected there would be more retractions for honest mistakes which, I am sure, happen from time to time in every lab. But it is far from representing the majority of cases.’

Just 54 (16%) of the retractions in the study were deemed to be due to honest errors – those not attributed to misconduct. These included errors of theory or data analysis, experimental errors and a lack of reproducibility.

Coudert also looked at the geographic distribution of authors on retracted papers, and found that this tended to correlate with chemistry papers in general, although certain countries were overrepresented in retractions, namely India and Iran. ‘It’s sometimes commonplace to link China to shady publication ethics, in particular due to cash incentives for publication and certain high-profile cases. But at least in the case of chemistry, China does not have a significantly higher retraction rate than the US,’ says Coudert.

He says the study highlights the need for openness and transparency in the investigations that lead to research being retracted. ‘Many retraction notices are quite opaque, and retraction sometimes occur a long time after the issues were raised. We need a more transparent process of investigation when serious concerns are raised.’

Ivan Oransky, co-founder of the blog Retraction Watch, agrees. ‘It’s always great to see someone looking at retractions in a scientific, data-driven way,’ he says, adding that studies like this highlight the importance of having a ‘fully searchable, comprehensive database of retractions’.

Retraction Watch recently built and launched a database containing more than 19,000 retracted papers that is available to researchers on request. ‘Any scholar who contacts us and has a research question, we send them a download of the entire thing,’ Oransky says, adding that the number of requests has been increasing since the data became available. ‘We hope that more people will study this in future.’

‘I also completely agree with [Coudert’s] conclusions about the opacity of a lot of these notices,’ he adds. ‘We’ve been arguing for better retraction notices since 2010.’