Phase change materials (PCMs) that absorb heat during the day and release it at night are a promising alternative to fossil fuel-based heating, a significant part of residential energy use that accounts for 27% of energy consumption globally. However, the PCMs proposed so far are largely synthetic polymers produced from petrochemicals, but new works suggest that lignin, a byproduct from the paper industry, may offer a more stable and sustainable way to produce PCMs. 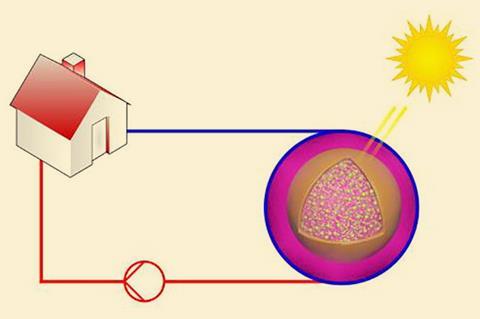 For small temperature differences there’s usually not much hope of extracting energy through a heat engine or transporting it. ‘What is nice with phase change materials is they can be tailored for low-grade heat,’ says Mika Sipponen, an assistant professor at Stockholm University who worked on the project during his postdoctoral project at Aalto University with Monika Österberg.

Removed as waste from wood pulp in paper production, lignin is mostly burned as a cheap fuel. However, mounting interest in zero waste economies has prompted research into making better use of lignin, and this interest increased when it emerged that lignin could form nanostructures. Consequently, Sipponen and Österberg and colleagues looked at the structures that formed when they mixed fatty acids with lignin. The fatty acids the researchers focused on, like lignin, are also cheap industrial byproducts.

Characterisation by atomic force microscopy and transmission electron microscopy suggested that nanocapsules of fatty acid formed in lignin. The researchers then probed the electron density of the structures with small-angle x-ray scattering measurements using the synchrotron at Diamond Light Source to confirm their understanding of the structures and formation mechanism. ‘They both dislike the water,’ says Österberg, explaining how the hybrid materials form through directed self-assembly colloidal synthesis by just mixing solutions of fatty acid and lignin with water.

As well as providing support structures, enthalpy measurements highlighted the benefits of lignin nano-encapsulation on the phase change behaviour of the fatty acids. Lauric acid, in particular, changes phase over the same narrow range – solidifying and melting around 39°C and 46°C, respectively – for 290 cycles in dry lignin nanocapsules and might be useful in panels integrated into building walls. As wet capsules that could be pumped through a heating system, they are stable for 25 cycles.

Kasper Moth-Poulson at Chalmers University of Technology in Sweden has also highlighted the merits of PCMs for indoor temperature regulation, and the challenge of producing them in an affordable way from renewable sources. ‘Österberg, Sipponen and co-workers show elegantly that plant derived lignin can be used as nanoscale confinement agents to produce functional PCM materials in a single-step synthetic procedure.’