Researchers have loaded an edible metal-organic framework (MOF) with the common painkiller ibuprofen and shown that the drug remains in the bloodstream of mice for twice as long as ibuprofen salts alone. The development could usher in edible MOF-based pharmaceuticals with improved efficacy and shelf life. 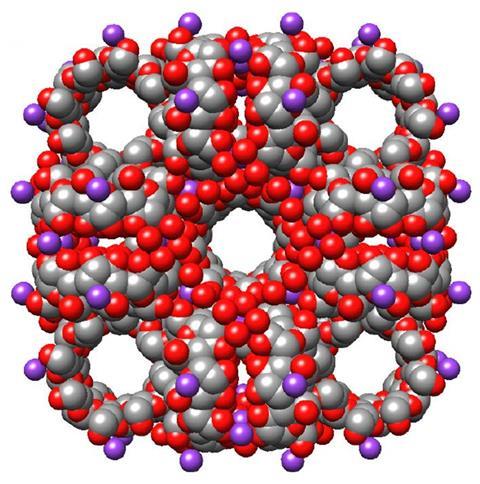 Incorporating ibuprofen into CD-MOF improves its stability and the doubles the length of its therapeutic effects (C grey, O red, K purple)

The high porosity of MOFs has made them promising candidates for several technologies. Last year saw the world’s first commercial MOF-based product – a packing material that slows fruit and vegetable ripening.

In 2010, Fraser Stoddart’s group at Northwestern University in Illinois, US, inadvertantly made a biocompatible MOF comprising edible sugars, namely cyclodextrins. Stoddart’s lab has since investigated several applications for this CD-MOF, including gas uptake and chemical separation. Now the group has used the same CD-MOF to encapsulate and deliver ibuprofen.

‘Unlike many other MOFs, [CD-MOF] is highly soluble in water,’ explains Karel Hartlieb, one of the researchers behind the technology. ‘Water solubility can be an issue for other potential applications … but for oral drug delivery it is a useful property.’

Ibuprofen in traditional tablets is usually in free-acid form, which has poor solubility that limits the speed of uptake and how long the therapeutic effects last. Although newer formulations exist that use various ibuprofen salts instead, which improve solubility and uptake, they are susceptible to moisture and limited to gel capsules, not dry tablets. Since cyclodextrins are known for their ability to improve the bioavailability of drugs, and the CD-MOF is stable in air and moisture, Hartlieb and his colleagues wondered if encapsulating ibuprofen inside the CD-MOF could offer some advantages.

The team developed two methods to encapsulate the painkiller. One grows the CD-MOF using gamma-cyclodextrin and the potassium salt of ibuprofen as the source of alkali metal cations required to form the framework. The other involves first making the CD-MOF using potassium hydroxide as the alkali metal source and then absorbing the free-acid of ibuprofen into it. During the absorption process, an anion-exchange occurs essentially forming the potassium salt of ibuprofen.

In experiments with mice, the researchers observed similar rates of uptake of ibuprofen from the loaded CD-MOF as control samples of pure potassium salt of ibuprofen alone, reaching peak concentration in 20 minutes. However, using CD-MOF had added benefit: the drug lasted twice as long in the blood plasma, doubling the period of relief without upping the dosage. Moreover, the air and water stability of the CD-MOF transferred to the ibuprofen-loaded material, which could potentially enhance its shelf life.

‘In my view, the really clever part is that when the MOF breaks down and releases its cargo, the cyclodextrin ligand plays its second role in acting as an excipient, binding ibuprofen within its interior and prolonging the half-life of the drug in the blood,’ comments Ross Forgan, who investigates MOF drug delivery at the University of Glasgow, UK. ‘I would hope that the work leads to further studies … particularly with active pharmaceutical ingredients whose properties mean they cannot currently be taken orally.’