Controlling the chirality of a molecule can be achieved using a light-driven molecular motor, say scientists in the Netherlands

A single molecule catalytic system that uses a light driven molecular motor to dynamically control the molecule’s chiral states has been developed by scientists in the Netherlands. The team says it could be a useful tool for creating catalysts that can be controlled to perform multiple functions in sequence and adds to the potential applications for molecular motors.

’As far as we know this behaviour is unprecedented. It is usually very difficult to change the handedness of the product of a catalytic asymmetric transformation unless one uses the opposite enantiomer of the catalyst,’ says Ben Feringa who conducted the work with Jiaobing Wang at the University of Groningen. 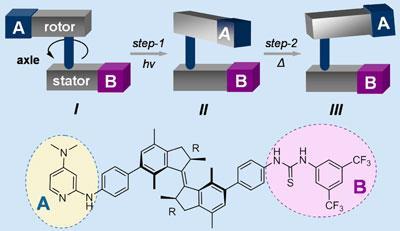 Clockwise rotation of the rotor around the axle, by photochemically and thermally induced steps, controls the position and helical orientation of the catalytic groups A and B, providing sequentially I, II, and III with different activities and stereoselectivities.

The team’s system takes advantage of the unique dynamic stereochemical features of unidirectional molecular motors which can be alternated by light. By integrating catalytic functional groups into a motor, the team produced a system in which a single enantiomer can be triggered in situ to produce a racemate, one enantiomer or the other enantiomer of a chiral product, on demand.

’We can switch between three different states with distinct activity and stereoselectivity,’ says Feringa. The sequence of events is dictated by the unidirectional nature of the motor. ’This means that by altering the rotary direction we alter the sequence in which the distinct catalytic states are reached,’ he adds.

Stephen Fletcher, an organic chemist at the University of Oxford, UK is enthusiastic about the work. ’The ability to dynamically turn on, off, and even reverse, the selectivity of an asymmetric catalyst is a real achievement,’ he says. ’It’s remarkable to be able to design a completely synthetic molecule with this level of control, and a fantastic demonstration of what molecular machines may be capable of in the future.’