Two molecules of water have been trapped inside a fullerene cage allowing the formation of a hydrogen bond between the two molecules to be observed. It is the first time that the elusive dimer of water has been isolated and could open the way to fundamental studies of hydrogen bonding in water. The technique could also be used to study the interaction of pairs of other species at the single-molecule level, the researchers suggest. 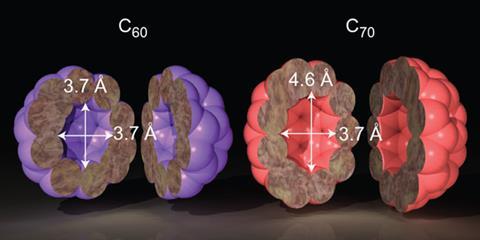 In the past, a limited number of single atoms and molecules have been trapped in C60 fullerenes, including rare gases, dihydrogen and water. Murata’s team wanted to see if they could trap a single water molecule in the slightly larger cavity of a C70 fullerene.

To do this they used a ‘molecular surgical’ method to peel open part of the outer shell of the fullerene through the stepwise cleavage of targeted C=C bonds of the cage, to create an opening large enough for water to enter. They then exposed the ruptured cages to water at high temperature and pressures to try to force a single water molecule into the cage, before selective restoration of the C=C bonds to trap it.

The team used HPLC to separate the water-containing cages from those that remained empty. To their surprise, they found that while some cages had trapped a single water molecule, as expected, others had captured two water molecules. ‘We knew that the inner space of C60 was not large enough for two water molecules, and before this study we thought that was also true for C70,’ says Murata. ‘We were very surprised to observe cages containing two trapped water molecules.’

Stop on a dimer

After introducing water into an open C70 derivative (β-13mem) under high pressure, the fullerene cage was closed

‘In this study we have clarified that two chemical species can be put inside a C70,’ says Murata. This could be extended to species other than water, he suggests, ‘and we can then study the chemical reaction of these two species at the single-molecule level’. The system also allows the study of single water molecules without any hydrogen bonding.

Other experts in the field are intrigued by the possibilities that the new work offers. ‘Each cage becomes a “nanolaboratory”, in which the interaction of two water molecules may be studied under a wide range of conditions, approximately isolated from the environment,’ says Malcolm Levitt of the University of Southampton in the UK . ‘This material is likely to be a superb playground for testing models of intermolecular interactions and hydrogen bonding, for studying quantum confinement effects and, perhaps, providing a pathway to new sorts of materials.’

Martin Chaplin, emeritus professor of applied science at London South Bank University in the UK, says: ‘This enclosed and isolated water dimer, with a single hydrogen bond between the two molecules, is a fascinating and important product. Although the water molecules are hydrogen bonded they have a different structure to those found in atmospheric water dimers due to the compression caused by their situation inside the C70 fullerene. I am sure that this work will encourage much further research in spite of the synthetic complexity.’