Sepsis’ sticking point in for a shock

A new method for monitoring the onset of sepsis touted by US researchers may assist clinicians in helping more of their patients survive this potentially fatal condition.

Sepsis, often referred to as blood poisoning, can be the result of an innocuous infection or injury. Without treatment, the immune system becomes overwhelmed, leading to organ shutdown. In the UK alone, 30,000 people die as a direct result of the condition. Sepsis needs to be caught early to maximise the chances of a full recovery. However, existing diagnostics rely on antibody labelling, which requires samples to be prepared and tested by specialist laboratory staff. This requires time that a patient might not be able to spare. ‘Existing methods are too cumbersome,’ explains Joel Voldman, heading up the new study at Massachusetts Institute of Technology. 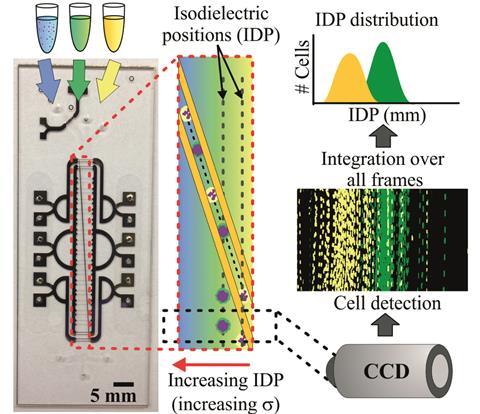 Voldman’s group devised a microfluidic method that takes advantage of the white blood cells’ electrical properties, which makes it possible to detect sepsis quickly in its earliest stages. Sepsis triggers white blood cells to become activated and circulate in the blood. The number of these activated cells indicates the disease’s progression. Applying an electric field then separates activated and non-activated cells based on subtle differences in their electrical properties.

While researchers have known this distinction for some time, applying this principle has proven difficult until now as activated white blood cells ‘become very sticky’, as Voldman puts it. ‘That’s good in your body, but a problem for microfluidics,’ as septic blood can block analytical devices. Using only a small sample is not an option either – septic blood is non-uniform in composition, which means samples need to be sufficiently large to offer an accurate picture.

To tackle this problem, the team created a double-sided device with a 2mm wide microchannel, placing electrodes both at the top and bottom of the channel. The electrical field pushes the cells to the centre of the channel, preventing them from sticking and slowing things down. The team tested their method on septic blood taken from mice, and found that the results agreed with those obtained by conventional methods.

Jonathan Cooper, an expert in biomedical engineering and microfluidics at the University of Glasgow, UK, calls the early results ‘encouraging’, but feels that there is still a long road ahead. ‘The challenge will be to clearly understand how the devices will translate to change clinical practice.’

‘This isn’t an assay someone can run at the bedside,’ acknowledges Voldman, but he is optimistic about the future. ‘[Our aim] is to bring the technology into the hospital and be able do the analysis in 15 to 20 minutes.’ Once this is feasible, ‘then, the physicians will use it’.