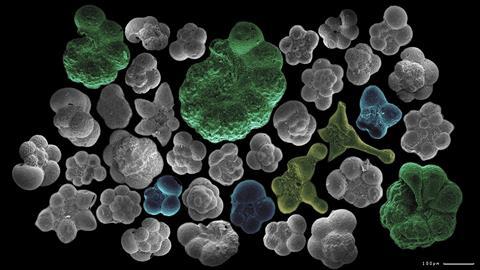 Calcium-based biominerals including calcium phosphates and calcium carbonates have found biomedical uses, as they are biocompatible and biodegradable. Nanoparticles can enhance and tune such materials’ properties but making synthetic biominerals with desirable properties in the lab is tricky.

Living organisms operate out of equilibrium, which affords them a high level of control over self-assembly processes. Rather than try to mimic nature, Guiseppe Falini from the University of Bologna, Italy, and colleagues have instead borrowed the natural growth process of unicellular marine organisms called foraminifera to make bionic calcite.

Foraminifera build skeletons out of calcite precipitated from seawater. They internalise seawater into large intracellular vacuoles and up the pH of those vacuoles, increasing the carbonate concentration and driving biomineralisation. Falini and his team wondered if additives in seawater would also get included in the calcite skeleton.

To test this, they grew the foraminifera Amphistrigina lessoni in the presence of fluorescent magnetic nanoparticles. It was easy to confirm that these nanoparticles were included in the mineral structure using scanning confocal microscopy.

The team say this proof-of-concept could be expanded to different organisms and nanoparticles.