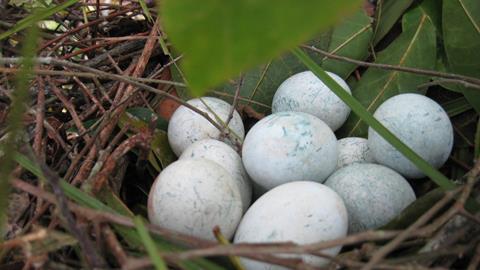 Greater Ani is not your regular cuckoo. Rather than dump its eggs in the nests of other species it builds its own and raises its young alongside other breeding Anis. The eggs bump into each other with quite some force as parent birds turn them during incubation. Now, researchers have shown that Anis have evolved eggs with the added protection of an uncommon mineral that keeps the eggs from cracking under pressure. 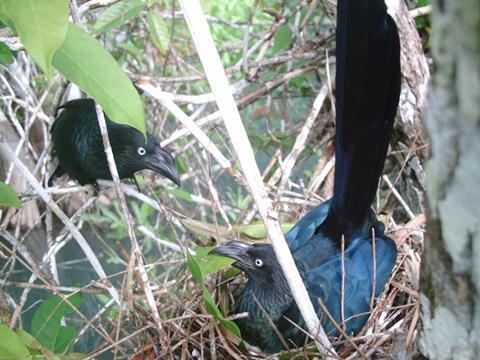 Vaterite, a form of calcium carbonate, sits on the eggshell of some birds in tiny spheres of varying size. It is less stable and abundant than calcite – another form of calcium carbonate that primarily constitutes the shell. Vaterite gives freshly laid Ani eggs their white chalky appearance. As incubation progresses, it gets scratched, exposing patches of the pigmented calcite underneath. When scientists studying nesting Greater Anis (Crotophaga major) in the Panama Canal noticed this change in the egg surface they decided to look into it.

Using an array of techniques, Steve Portugal of Royal Holloway, University of London, in the UK, and colleagues tested a few theories about the role of vaterite – one being shock absorption. The researchers calculated that when two Ani eggs collide, the egg surface deforms by 1μm. This, they realised, was little compared to the thickness of the vaterite coating, which is between 8.5 and 28.5μm. The vaterite layer increases the shell thickness by up to 10%, they report, and is more than enough to cushion the eggs from impact and breakage.

If the vaterite layer were too thin, Portugal says, pressure on contact would transmit through the vaterite to the underlying calcite. Sufficient pressure could then initiate a crack in the calcite. 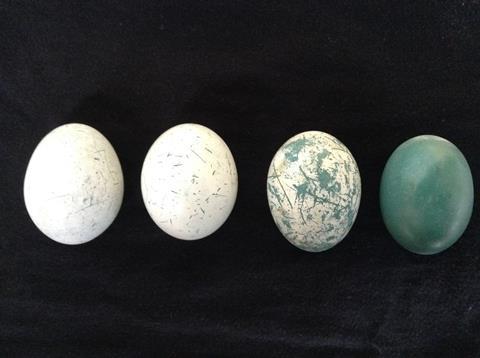 Portugal’s team is currently looking into other ways vaterite might keep eggs from fracturing. Team member James Bowen, from the UK’s Open University, explains that when two eggs press against each other and stress builds up, rather than letting it reach the calcite, the vaterite slides sideways, releasing the stress. ‘This lateral motion would then lead to abrasion and removal of vaterite,’ says Bowen.

‘Vaterite has long been a mysterious component of eggshells,’ says Mark Hauber, a biologist at the University of Illinois at Urbana-Champaign, US. ‘Its occurrence is limited to just a handful of species of birds, so its function has remained largely unstudied. This is the first study to test a structural function of vaterite.’

According to Hauber, vaterite is especially helpful for cooperatively nesting cuckoos, such as Anis, as their clutch size is typically large – about 15 eggs per nest – and chances of these eggs knocking together are high. ‘It seems that it acts as a kind of bumper to protect eggs from breaking in a crowded nest.’