Researchers in Germany have found a way to cut smokers’ exposure to toxic compounds by using copper nanoparticles to mimic the enzyme superoxide dismutase.

Superoxide radicals are a type of reactive oxygen species present in cigarette smoke. These radicals cause oxidative stress, a contributing factor in various diseases, including Alzheimer’s, Parkinson’s and lung cancer. Superoxide dismutase, an enzyme found in most living cells, scavenges reactive oxygen species to limit the damage caused by oxidative stress. Researchers have mimicked the effects of these enzymes before using metal-centred supramolecules but their cost and stability has prompted a search for cheaper, more efficient mimics. 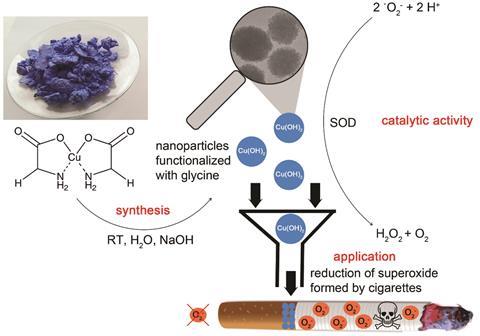 A lot of research into superoxide dismutase mimics has focused on synthesising small but complicated molecules. The advantage of Tremel’s nanoparticles is that they are easy to prepare quickly from only a few starting materials. ‘What is exciting here is that they have a very, very simple preparation which is much more convenient for industrial applications,’ remarks Clotilde Policar, an expert in superoxide dismutase mimics and metals in biology at the Ecole Normale Supérieure in Paris, France. Hui Wei, an expert in using nanomaterials for biomedical applications at Nanjing University, China, is impressed by the nanoparticles’ performance: ‘Surprisingly, the superoxide dismutase mimic even showed better activity per active site than natural superoxide dismutase.’ However, he also says that to apply these materials in cigarette filters ‘the long-term stability and safety towards animals should be investigated’.