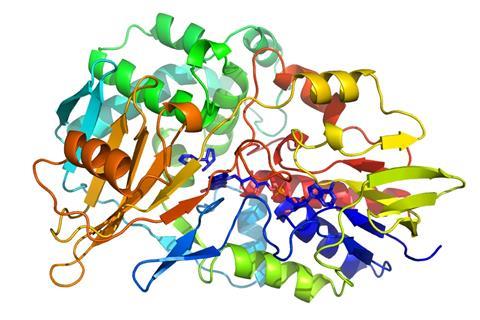 Scientists in the US have engineered an enzyme that halts nicotine’s psychoactive effects by breaking it down in the blood, before it can reach the brain. The enzyme could be developed into a nicotine dependence treatment that smokers could take to help them stop smoking.

Quitting smoking is hard. A US government report from 2011 found almost 70% of American smokers want to quit and over half of smokers have tried to quit but fewer than 6% succeeded. Current cessation treatments and prescription medicines to help people stop smoking have varying success rates. Clinical trials of vaccines that encourage the body to develop nicotine antibodies to prevent it from crossing the blood–brain barrier failed to increase abstinence rates compared to a placebo.

An alternative to blocking nicotine is breaking it down. Back in 2015, K D Janda and colleagues at the Scripps Research Institute reported that the microorganism Pseudomonas putida has an enzyme, NicA2, which catalyses the oxidation of nicotine to N-methylmyosmine. In vivo tests with the enzyme had promising results but on moving to in vitro tests it became apparent the kidneys would filter out NicA2, rendering any treatment with the free enzyme short-lived.

Now, Janda and his team have stabilised NicA2. Crystal data showed that the first 52 amino acids of NicA2 are uninvolved in its activity so the team removed 50 of those and fused the rest of the enzyme to an albumin-binding domain. Associating NicA2 with albumin – the most abundant protein in plasma – increased its half-life in the body.

The team tested their new treatment on nicotine-addicted rats. After 24–48 hours of abstinence, the rats treated with the modified enzyme were less irritable and experienced fewer withdrawal symptoms, such as tremors and teeth chattering, than those who had not. The enzyme also completely eliminated nicotine from the rat’s blood and broke it down into harmless non-psychoactive products.

‘Helping smokers quit by depriving them of the nicotine kick through a nicotine degrading enzyme circulating in the body is certainly an interesting approach’ says Per-Åke Nygren, an expert in protein biotechnology at the KTH Royal Institute of Technology in Sweden. ‘However, the anti-drug immunological response from repeated delivery of a nicotine degrading enzyme of bacterial origin needs to be assessed. There is a risk that patients might develop neutralising antibodies, or that other adverse effects arise.’

Janda says this proof of concept provides a glimpse that biological products may have a role in treating substance use disorders. He adds ‘we will optimise the system to enhance further stability in vivo and remove potential parts that could cause an immune response.’